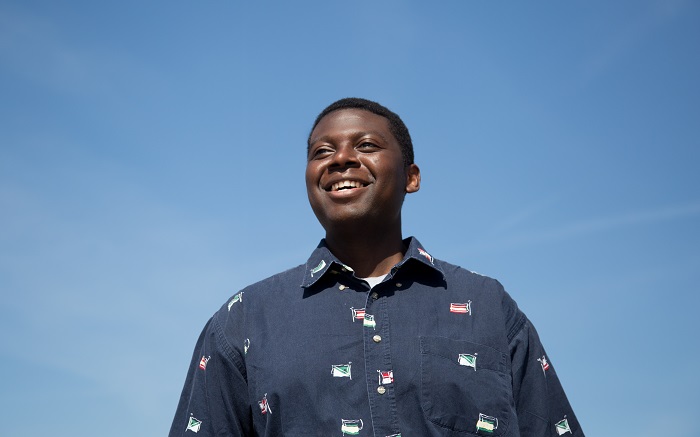 Marco Woolf on the living, breathing nature of stories

The Malawian-born British artist Marco Woolf takes on the role of improvisational storyteller on Francine, I, an introspective new EP, run through by jazzy contours. Discover the video for “Modus Operandi,” the first single from the record,  along with a conversation with the artist on PAM.

Following his 2018 jazz-folk EP, Self,, Marco Woolf has been engaging with a character that stems from his Malawian roots, that of the storyteller. Francine, I contains five new tracks that see the artist take himself to task, working with the advantage of a gap in the studio wall to spin English-style sounds that amplify on contact with the air and invade the newfound space. Many musicians combine in this soundscape: acoustic guitar, bass, piano and saxophone circulate freely on ethereal melodies, crossing and superimposing themselves according to the unpredictable evolution of Woolf’s arrangements. On “With Love & Squalor,” we recognize simultaneously the codes of the UK jazz movement, the melodic sensitivity of an old-fashioned folk song, and the massive energy of post-rock. Instead, “Francine” forms a pathway through African songs, ambient layers and aerial brass, attempting to personify an imaginary figure that serves as a thematic throughline for the EP. This omnipresent motif also characterizes songs like the dreamy “A Bridge Too Far” or the powerful “Let’s Build This House,” which ends in fireworks, embodying a style in perpetual motion, where the atmosphere grows dense or evaporates with each new chapter of the story. While the EP hides social messages and personal stories of various degrees of seriousness, we live it all as a waking dream – Woolf’s music is at the same time light, complex, rich and immediate, swarming with micro-details that multiply with each new listen. Feel the experience with “Modus Operandi,” which can be found below.

The press release emphasizes improvisation. What role does it play in your live performances?

Yes, clearly, at my shows I often like to make up stories to weave a narrative into my set or to give context to the music I’m playing. I hate talking between songs, it makes me really anxious. I guess I started telling these improvised anecdotes to combat that. But I also love jazz, and improvisation is rooted in that tradition. I like the idea of a unique performance that takes place in the moment – it means that every time I play it sounds new and I’m never really sure what’s going to happen. That’s how things stay exciting for me.

Is this state of mind reflected in your production?

In terms of production, improvisation comes into play completely. I worked with over 20 different musicians on this project – the credit list is ridiculous for a 5 track EP! – and I really wanted each of their personalities to come through in the music. In order for that to happen, I needed to be open-minded about recording. It was really important to me to create a space where each person felt free enough to explore, understand and feel the songs in a personal way.

Are you answering the question “who is Francine?” through this EP? Is she a real woman, a concept, or maybe both?

Probably both, Francine appeared in an improvised story I told at a concert so there was no preconceived idea in her creation. As I was describing her, there was something about Francine’s character, or at least what she represented, that I really wanted to explore. Apparently, the audience really responded to her story after this particular show. Almost everyone who came to talk to me asked, “So who is this Francine?” I think the image of a matriarchal figurehead is pretty universal. I was inspired to delve a little deeper into her character and the music for this EP came in response to that journey.

Today we premiere the video for “Modus Operandi.” What is the story behind this song, and what did you want to show through the video?

“Modus Operandi” is about the experience of being an immigrant, the feeling of not quite belonging in this place called “home.” But the longer you stay in that place, the less you feel your homeland is your home. You are constantly on that “border.” When I was telling Francine’s story, I was thinking about what that experience must be like for a mother. My parents chose to move to the UK primarily for me and my brother. Now, we are more deeply rooted in the UK than in Malawi and we often feel this tension in the way we identify with our parents. I wanted the video to depict this dichotomy and the war it creates in the mind, but also the determination, sense of peace and purpose I saw in my own parents.

Are your Malawian musical roots present when you write or play a song?

As you can see, storytelling plays a huge role in my music and it’s definitely something I take from Malawi. I remember when I was a kid, my aunts and uncles would tell me crazy African folk tales that gave fantastic explanations of how the world worked. I would drink in their words – I loved those stories so much. Many of them were not written down. Instead they were passed down orally and reshaped and adapted over time. With each new telling, the story changes a little, it becomes a living, breathing thing. It’s very similar to the idea of a jazz standard. During the times when my family shared stories, we also sang together, so those two things go hand in hand for me.