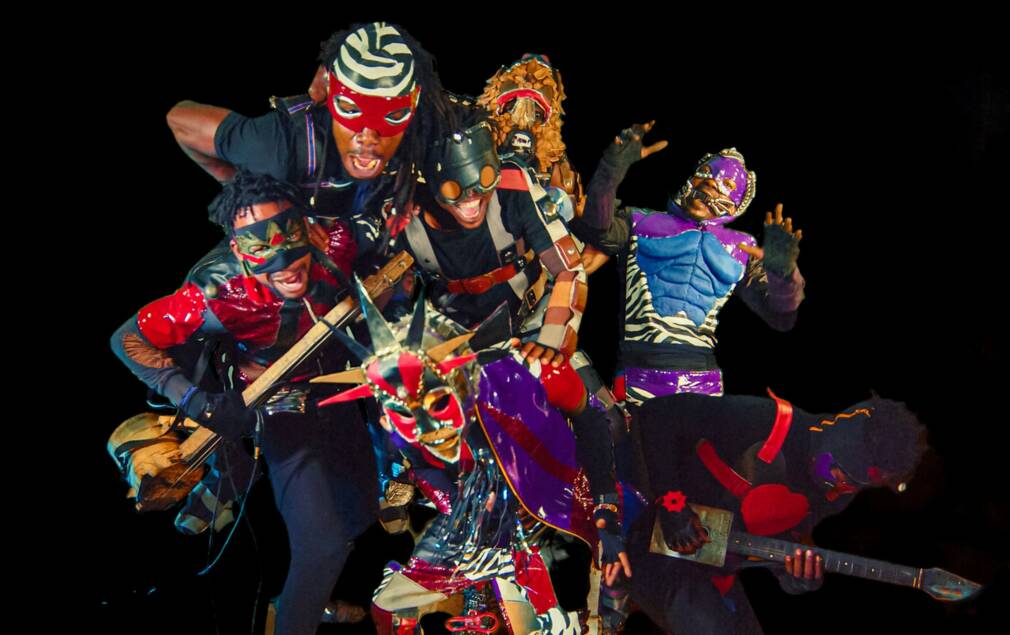 The Kinshasa-born band is back with their slum-crafted instruments in a new album, which encapsulates their innovative sounds: punk, electronic, industrial and soukous-inspired, all at once.

Fulu Miziki came to life in Kinshasa underground scene thanks to Pisco Crane’s crafty and eco-conscious spirit, who proved that making “music from the garbage” (English for Fulu Miziki) is completely doable without making garbage music. The artist who grew up in Kinshasa slums met with fellow instrument builder Bebson De La Rue and gathered discarded trash around him to craft instruments made of old computer bits, oils cans, springs, metal pipes and offcuts of tubing. He was later joined by Lady Aisha, an all-round artist who designed their eccentric costumes, masks and scenography to match with their DIY instruments and innovative sounds. Unsurprisingly, they shored up at the Nyege Nyege studios in Kampala to put together this album. Back in 2019, PAM had met with the Afro-futuristic crew at the Nyege Nyege festival and could already predict this would be a very fruitful collaboration.

HHY & The Macumbas’ producer Jonathan Saldanha, who recorded N’Djila Wa Mudujimu, manage to capture their revolutionary sounds inspired by Congolese soukous, an almost undefinable mix of punk, electronic music, industrial sonics and spiritual jazz. The track “Kraut”, showcases the band’s skillful way of blending various-sounding percussions, adding war cries and rousing repetitive chants to the mix. N’Djila Wa Mudujimu is a deeply enjoyable album throughout which encapsulates Fulu Miziki’s style, which, might, unfortunately, be their last given the band’s recent split. On the bright side, Pisco Crane and Lady Aisha are still making music together and given their trademark resourcefulness, there are many reasons to await their next innovative creation.

Listen to “Kraut” in our afro + club playlist.