On stage, he stands, both proud and modest, both quiet and filled with a powerful serenity that explodes to the audience’s souls through a tiny accordion, called gaita, and one of the two basic elements of funaná music along with ferrinho. In private, he’s equally as quiet, and not very talkative, yet highly observant and attentive. At 79 years old, this last of the great masters of funaná still in activity, seems to be carrying in this small instrument all the beauty and the history of an island where musical culture is the founding and unifying element of the community.

It was a Saturday night in B.Leza, the cult venue for afro music in Lisbon, that Bitori presented the only music he’s been playing, practicing and promoting for 60 years now, after having defied the colonial ban, the intellectual elites’ mockings and the record labels’ reluctance there and here in Europe regarding funaná. It’s that this music and the associated dance originating from the peasants’ communities of Santiago island were considered too rural, too elementary, too creole by the Portuguese colonist. People would gather in the streets, and do this body contact-styled dance, both things that did not please to the nationalist and puritan Portuguese colonist, who only managed to identify to morna, a morally acceptable genre seen as educated and lettered.

Backed on stage by the well-named Chando Graciosa, the only singer Bitori had accepted with good grace, who also plays ferrinho – a metal bar scraped by a simple knife – ; by Danilo Tavares on bass ; by drummer Toy Paris, genius Tito Paris‘ brother ; and by percussionist Miroca Paris form the same family, who’s played with Cesária Évora for 12 years, the Cabo-Verdean master not only proved that funaná is not a dated music even if it dates back to the beginning of the 20th century, but he also showed that this music is just as powerful as the most frantic afro-house rhythms of today’s Angola or South Africa.

Recently awarded the Cabo Verde Music Award “Lifetime achievement”, given by the president of the Republic himself, then invited to play at Womex 2017, and offered a reissue by Analog Africa of his debut album, initially discreetly released in 1998 (see here for our review – only in French), Bitori and his band calmly reposition funaná where it’s meant to be and where it’s always been: right in the middle of people, in a mood of togetherness and sharing (two values that constitute the Cabo Verdean “morabeza”).

Bitori’s “favourite singer” Chando Graciosa puts it with his own words: “funaná represents the citizens of Cabo Verde, who are defined not by what they own but by what keep them going: hope. Morna is about emigration, diaspora, loneliness, saudade / nostalgia, desperation, whereas funaná celebrates hope and is an ode to life and give strength to whoever is singing or listening. Funaná is Cabo Verde in its deepest sense, funaná is Santiago, funaná is life.”

We talked to the funaná rebel a few days after his show, in Lisbon, where the Cabo Verdean rural funaná has transformed into an urban music and dance enthusiastically promoted and practiced by those who know it’s high time colonial prejudices were left where they belong: in the dark hours of history.

Pan African Music : On stage you sing “Balantin / São Tomé”, a song that deals with emigration from Cabo Verde to São Tomé and Príncipe [another Portuguese colony until 1975]. You had to leave your native island of Santiago and go to this other island so you could buy your first gaita (accordion). Does this song talk about this very story?

Bitori: Yes. You couldn’t buy gaita in Cabo Verde at the time [in the 1950s] because it was too expensive. It was too hard to gather the 750 escudos necessary to buy one. So I went to São Tomé in 1954 to try and get hold of an accordion. There I had to work very hard in the roças [coffee and cacao plantations where the workers only received ⅓ or half of their salary while working, forced to use it for food and basic needs, while the rest would be paid at the end of the contract]. Then I became hairdresser, and I only would earn 50 escudos a month. I saved most of my salary’s amount, and in 1959, when I finally was able to afford the instrument I went back to Santiago, Cabo Verde, where I worked hard again, this time in a quarry.

THIS IS THE NAME WE WOULD GIVE TO THE DUST THAT RAISED FROM THE GROUND WHEN PEOPLE WOULD GATHER TO DANCE AND SING FUNANÁ IN THE STREETS.

What is the origin of the term funaná?

This is the name we would give to the dust that raised from the ground when people would gather to dance and sing funaná in the streets. This is also the name we gave to those gatherings. Someone would come and say: “Tomorrow at 6 pm there is a funaná at this place. Just come!”

Did the Portuguese colonialist forbid you to play funaná?

Yes they did: you couldn’t play accordion or funaná after 20h00, and it was forbidden to sing lyrics that criticized the Portuguese. And if you got caught by the police, they would ask you to stop. And if you disobeyed, they’d take the accordion and put you in jail for the night.

Have you always respected the colonial rules?

Yes I was very careful. Even if I played after the legal hours, in private baptisms and wedding ceremonies, I avoided to sing lyrics that could hurt the Portuguese.

Are there any recordings of those times?

No. Nothing was recorded until the 1990s…

In 1998, you finally recorded your own compositions for the album Bitori Nha Bibinha & Chando Graciosa, with fellow countryman and singer Chando Graciosa on vocals. Today he’s the one who sings on stage. Where did you meet him?

Chando has always played in the restaurants and bars in Cabo Verde, where he would work for peanuts, every night until the early morning. So when we first came to play in Portugal, he decided to stay in Europe because he was fed up with living out of odd jobs… He eventually settled in the Netherlands.

I’M TEACHING ACCORDION IN MY HOUSE, TO ADULTS AND CHILDREN. IT’S FREE FOR THE KIDS. THEY DON’T HAVE THAT MUCH MONEY, SO WHY WOULD I ASK THEM TO PAY?

Now that Bitori performs outside of Cabo Verde, have you ever considered collaborating with other singers than Chando?

No! Chando is my only favorite singer!

At more than 80 years old, you’re still giving accordion classes in Cabo Verde. Is it a way to transmit the culture of your country?

I’m teaching accordion in my house, to adults and children. It’s free for the kids. They don’t have that much money, so why would I ask them to pay? If they had to pay, they would just come every now and then, and eventually they wouldn’t learn anything. As it’s free for them, they come at every lesson!

Do you teach accordion to your own children too?

How did you learn accordion?

I’m a self-taught musician. I believe that music is daily activity, and if you don’t practice every day, you eventually forget. Writing lyrics is a different story: you can do it anywhere and whenever, just by improvising.

Actually, funaná lyrics deal with the simple daily life of the one who writes them, right?

Exactly. For example, we’re four people in this room [Bitori, his manager Miriam, his photographer João, and myself] and we could easily write a funaná song! [He improvises lyrics] “The other day, I was in Portugal, etc. etc.” See? It’s that easy. Then you just have to find a melody.

And do you come up with the melody and the music?

B.: I dream about melodies and music every single night. When I used to have a small recorder, I would record them straight when I woke up, so I wouldn’t forget about it. But as I don’t have any recording device at the moment, there are many melodies that get lost every day…
João Barbosa [Bitori’s official photographer]: Bitori, is it a pocket recorder that you need?
B.: Yes…
J.B.: [He talks to the manager] Miriam, did you get that? You’ve got to find him a recording device so he can record his ideas!
Miriam Leah Brenner [Bitori’s manager]: Look into your bag, Bitori: the phone I gave you today has a recording function! I’ll show you how to use it.

Does it mean there could be a new Bitori album in the next months?

It could be: every morning I wake up with new ideas.

Thanks a lot, Bitori! Now would you mind playing a funaná for us outside, on the square?

I’d love to! But where is my gaita? 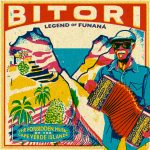 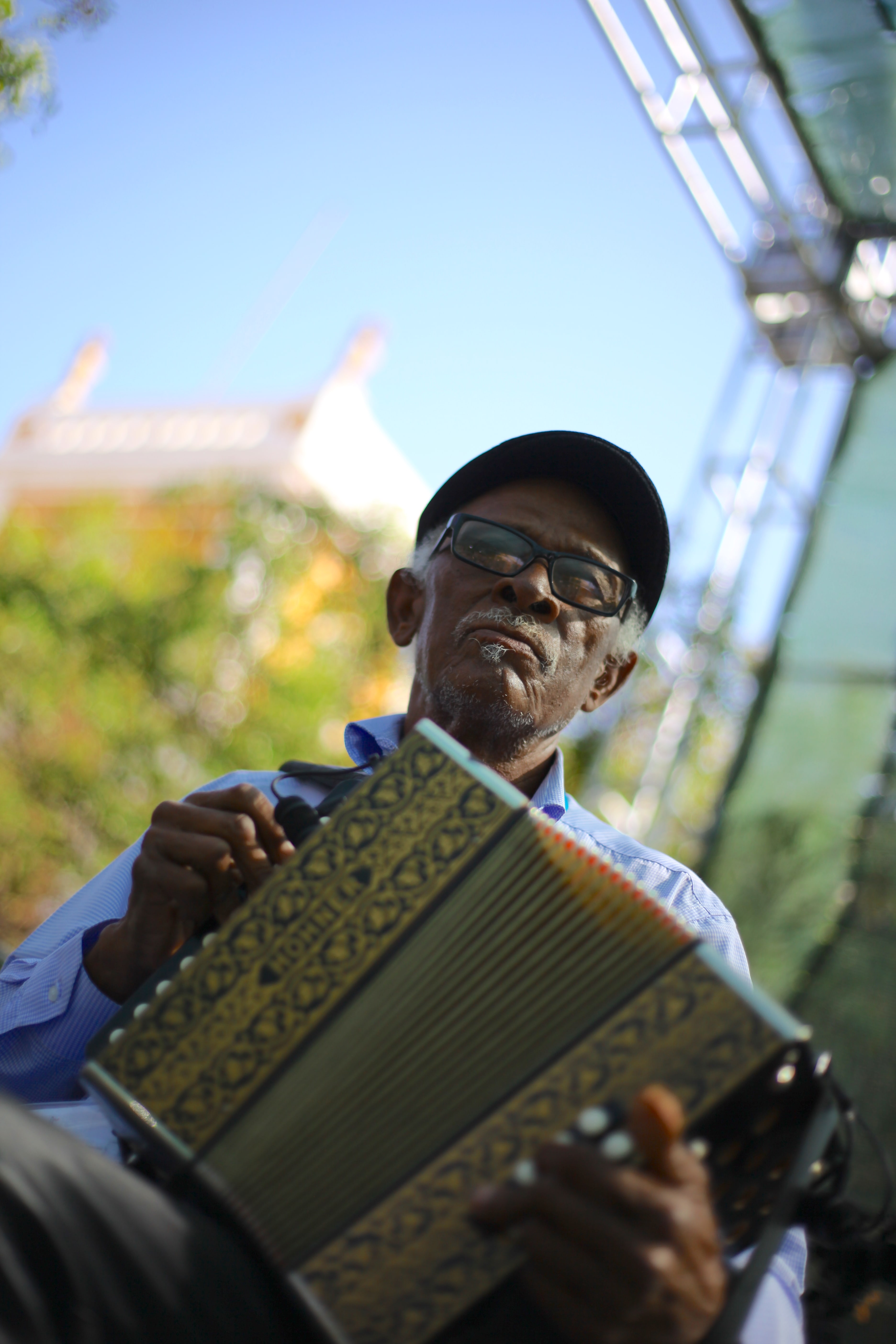 The Good Samaritans’ cosmic Edo-Funk brought back to life by Analog...
News