Orchestre Poly‑Rythmo: from the streets to the worldwide groove 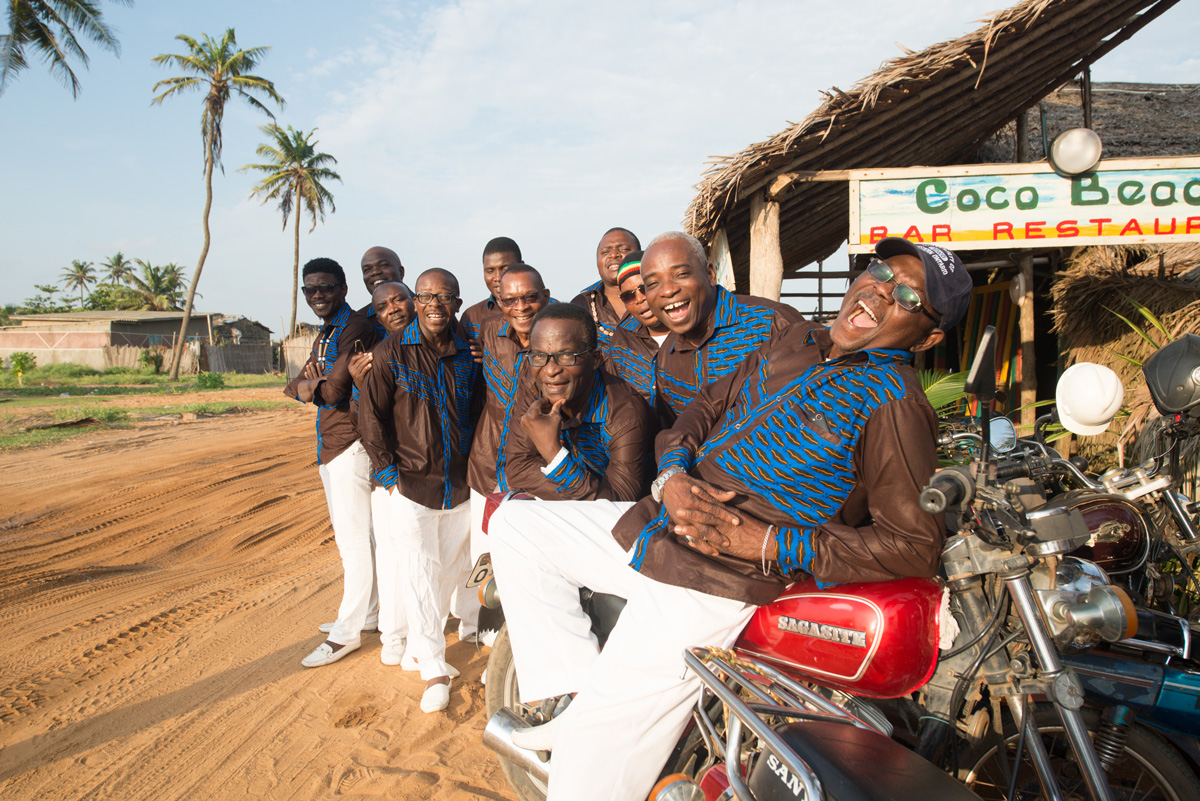 This very prolific African orchestra has been playing for almost 50 years and has released more than 500 records. The “Tout Puissant” Orchestre Poly-Rythmo de Cotonou has just released Madjafalao, and decided to hit the road and perform their multi-groove to European audiences. Earlier this month in Paris, The Benin-based band was the last-minute guest of the Tropical Discoteq night that took place in a hip restaurant of the beautiful public garden Buttes Chaumont. The band played at the audience level, just next to them, without stage or lighting, but with a perfect sound and an irresistible groove that generated a strong enthusiasm among the attendees that night. A few minutes before the show, we had a little conversation with historic singer Vincent Ahehehinnou – he’s the voice you can hear on Poly-Rythmo’s 1973 hit “Ou c’est lui ou c’est moi“.

You’ve released more than 500 records; do you own a copy for each one of them? Is it still possible to find the original pressings?

Vincent Ahehehinnou: We don’t even possess our own records ourselves! You can find them on the web for ridiculously high prices – 500€, 800€… Poly-Rythmo’s vinyl albums make records dealers rich today, and I do like that! I’m glad that we can make those people happy: they tried hard to find original copies of our albums. Back then, the records were pressed in Nigeria, and they would become distorted because of the heavy heat. So what’s left today are the ones produced in France or in the UK, which last longer.

The name Poly-Rythmo comes from your ability to play many different rhythms and musical genres: how would you define the band’s project since you’ve started in 1968?

In 2018 we’ll celebrate our 50th anniversary, and we’ve always followed the same path – yet winding sometimes. Imagine that you are on a road, and you pass along a fruit shop, then a shoe shop, etc. On the very same road, you’d see all these opportunities. Well the same goes for the path we chose for Poly-Rythmo: all those musical genres are here along our way.

“THROUGH SOME OF OUR FRIENDS WHO WERE COMING FROM ELITE FAMILIES AND HAD ENOUGH MONEY TO BUY RECORDS, WE COULD LISTEN TO THE ALBUMS, AT LAST! THIS WAY, WHEN OUR REGULAR AUDIENCE ASKED US TO PERFORM A SONG THEY HEARD ON THE RADIO, WE WOULD GET THE VINYL RECORD, LEARN THE ARRANGEMENTS, AND WE’D PERFORM IT THE NEXT WEEK!”

Congolese rumba, Ghanaian highlife, American funk, afrobeat, soul, jazz… How did you manage to learn all those music genres in 1950s and 1960s’ Benin?

We’re all self-taught musicians, and we learned by listening to the others, trying to perform their songs the best we could. There was only one radio station in the ’50s and ’60s in our country – the state-owned radio [ORTB – Office de Radiodiffusion et Télévision du Bénin]. Listening to the radio was the only way to hear new music from the Western countries, especially during the weekend shows, “Disques demandés” (“Requested records”), when listeners would call the station to make dedications to their friends. Then the record industry grew and the first record shops opened – we called them “discotheques”. Through some of our friends who were coming from elite families and had enough money to buy records, we could listen to the albums, at last! This way, when our regular audience asked us to perform a song they heard on the radio, we would get the vinyl record, learn the arrangements, and we’d perform it the next week! This is the reason why they called us “The Almighty” Orchestre Poly-Rythmo: we were able to play any song! We learned on the streets, as the great Manu Dibango put it once.

Can you tell us more about this encounter with Manu Dibango?

The Poly-Rythmo was chosen as the backing band for Manu Dibango when he came to play in Cotonou around 1974. At this time, a promoter would better hire us if he wanted to have people come and see the show! A member of Manu Dibango’s crew brought us the music scores for the songs we were supposed to play. We did not even look at them – we could not read a music score! – and we went straight to the discothèque to listen to the album. The day of the show, Manu came to meet us at the venue – a bar – and he asked us to follow the scores. We confessed to him that we had not even read them, but that we were ready to play. Still, he was very upset… He gave the signal for the start, and we played the whole set without any single mistake. He was totally stunned! He put his sax down, looked at us and said: “well, you’ve been to the best school… the school of the streets.” 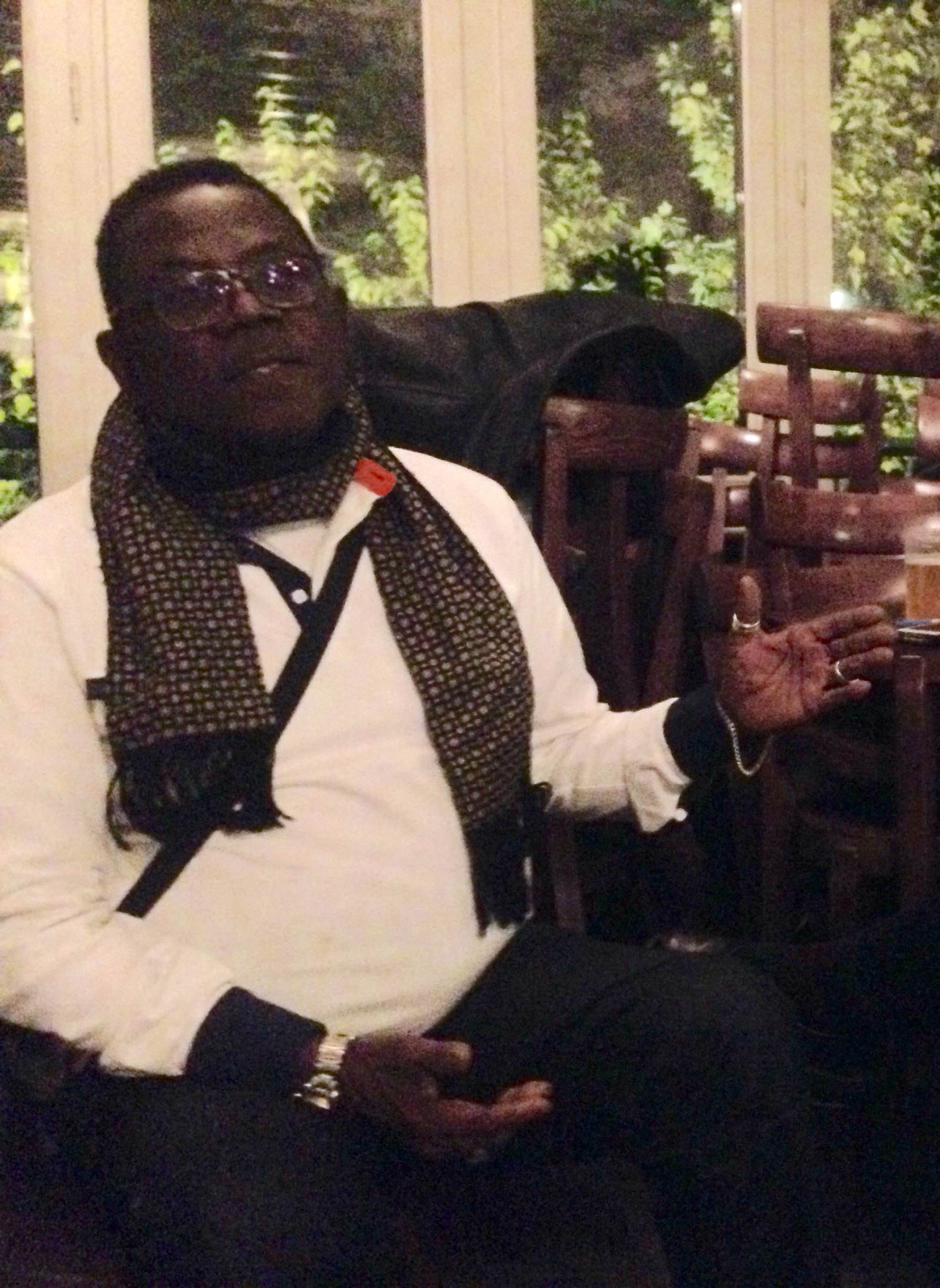