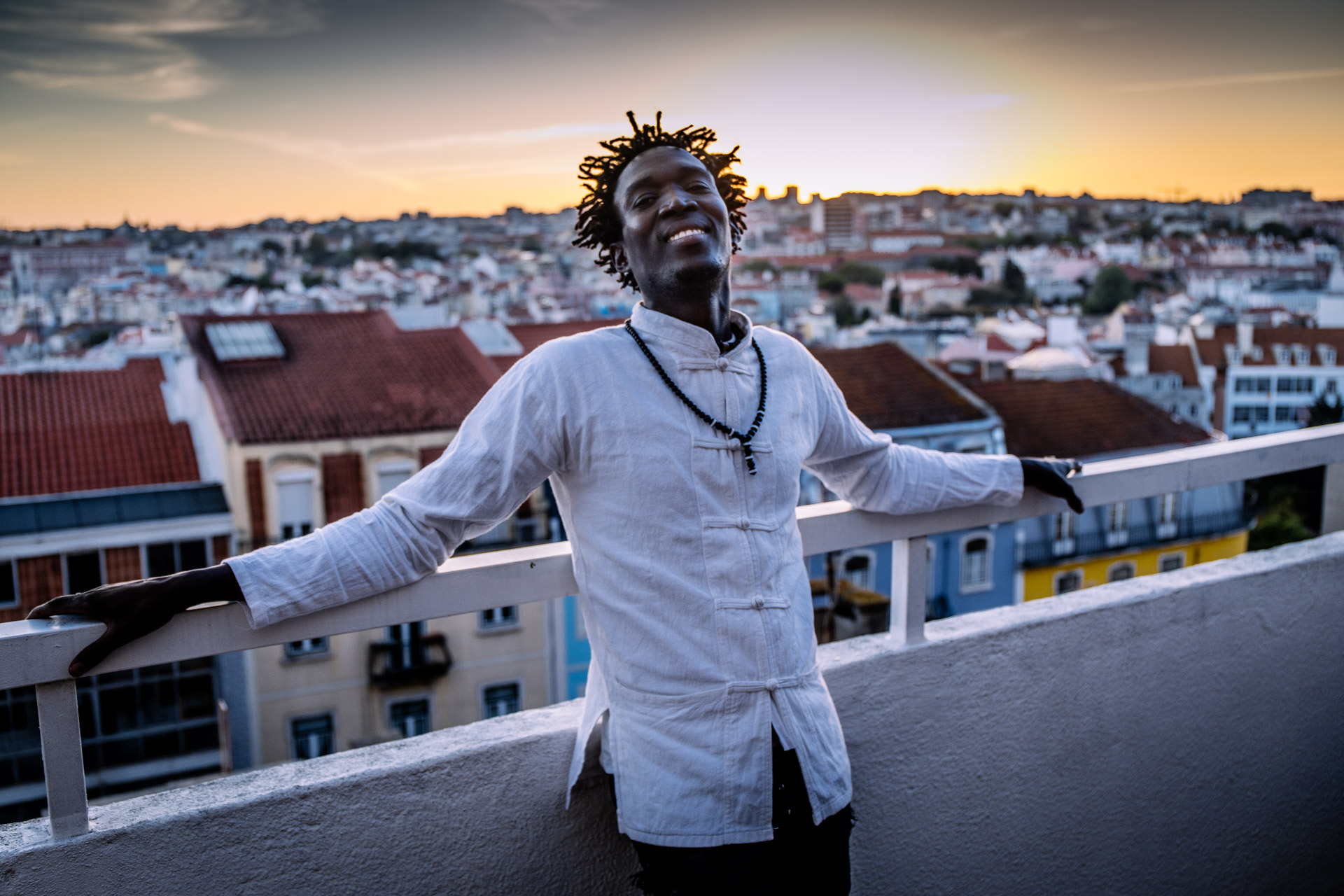 Binhanquinhe Quimor is simply Binhan, singer and composer from Guinea-Bissau, who, since 2008 has denounced the social and political misery of his country through songs full of love and hope, and committed and realistic lyrics. A frequent collaborator of Guinea-Bissau cult band Super Mama Djombo, Binhan sees his 2015 album Lifante Pupa released worldwide via Cantos Music.

We had him over the phone in Lisbon, where the Guinean musician was currently rehearsing for the album release show at B.Leza, the Portuguese capital cult club for afro music.

PAM : Hello Binhan. Lifante Pupa is gonna be released worldwide this week. We know you’ve always attached importance to your lyrics. What is the main topic of the album?
Bihan : There are three main themes : peace, love and hope. There can be no love without peace. And love is an essential value that brings hope, specifically for the people of Guinea-Bissau, who I sing for.

PAM : So what is the message you want to deliver with this album?
B : This album is a way to make the world know about what happens in a country who definitely needs to meet peace. This is why my songs always bear a social criticism, because my country has been in crisis for years now. After the 1998 crisis [a civil war that broke out after a coup d’État against the president], Guinea-Bissau never really lived under peace, until today and this new political crisis [government instability since 2014].

I’M JUST DESCRIBING THE REALITY OF A SITUATION. MY MUSIC IS ACCEPTED ALL OVER GUINEA-BISSAU, IN THE WHOLE SOCIETY, AND HAS A RIGHT TO BE PLAYED. AND UNTIL KNOW, THE GOVERNMENT HAS NEVER CENSORED MY MUSIC.

PAM : Your lyrics are in Guinean Creole and Portuguese. Do you think your message can reach the international audiences, when they don’t understand these languages?
B : These are the languages I’ve always spoken. And I think that when you listen to my songs or when you see me playing on stage, you know what my music is about. Music is still the most universal language, I think.

PAM : The Super Mama Djombo has been a very popular Guinean band in your country since the 1960s, noticeably for their separatist positions, their tributes to Amilcar Cabral, and their role in the liberation of your country from the Portuguese colonist. Do you think music can still play a role and have an impact on society, particularly in Guinea-Bissau where the political and social crisis is today pretty serious – the Movement of Conscient and Non Conform Citizens is asking for the resignation of the actual president of the Republic. And is your music accepted by the government and the population.
B : Who is provoking the people? The politicians. Who is facing the consequences? The youth. What future for them? Almost none today. I sing in order to reveal the problems. And because I’m just describing the reality of a situation, my music is accepted all over Guinea-Bissau, in the whole society, and has a right to be played. And until know, the government has never censored my music.

PAM : In the song “Bolseiros” (“scholarship students”), you sing about Guinea-Bissau students who are awarded a grant to go study abroad. Can you tell us more about this topic?
B : A lot of young Guineans get a scholarship grant from the government and go abroad to study. But when they’re back in Guinea-Bissau, they don’t have any job opportuninty, and they end up being unemployed or living on the streets. I think there should be a reform in the country’s administration so young people can work in the field they’ve studied for. Some of them never come back in their country or settle abroad, while Guinea-Bissau needs them.

PAM : You traveled thanks to your music, and you met artists abroad, like Monica Seka, “the queen of afrozouk”, who sings on your album. How do you consider the music coming from abroad?
B : This album was recorded in Guinea-Bissau and in Abidjan, Côte d’Ivoire. There I met Monica Seka, the country’s great singer. It was such a great honor to be able so sing with her. I also invited an exceptional Cameroonian singer, Queen Etmen. I think music is an amazing place to meet people.

PAM : Talking about collaboration, you’ve joined the Super Mama Djombo – a Guinea-Bissau cult band since the end of the ’60s – as a vocalist on record and on stage. Can you tell us more about this experience?
B : I joined the band in 2007 to participate in the recording of their album. This band gave so much hope to Guineans, and I have to say I’ve learned a lot of things with them. They’re a true school for life to me.

PAM : After ten years of collaboration with Super Mama Djombo, I guess you have many stories to recall. Is there one you want to tell us?
B : In 2008, we went to record an album in Iceland. It was the first time I had left my country to go to Europe. There were so many people in the streets, that I did not dare going out…! One of the members of the band asked me if I could go buy him cigarettes. I had to tell him I could not go because of the cold outside! We eventually stayed there one month, and everything finally went pretty well. I even went back to Iceland three times, and I love this country.

PAM : You ended up falling in love with Iceland?
B : Yes, Iceland has become a brother country for me!

LISTEN TO THE ALBUM LIFANTE PUPA VIA SPOTIFY AND DEEZER!