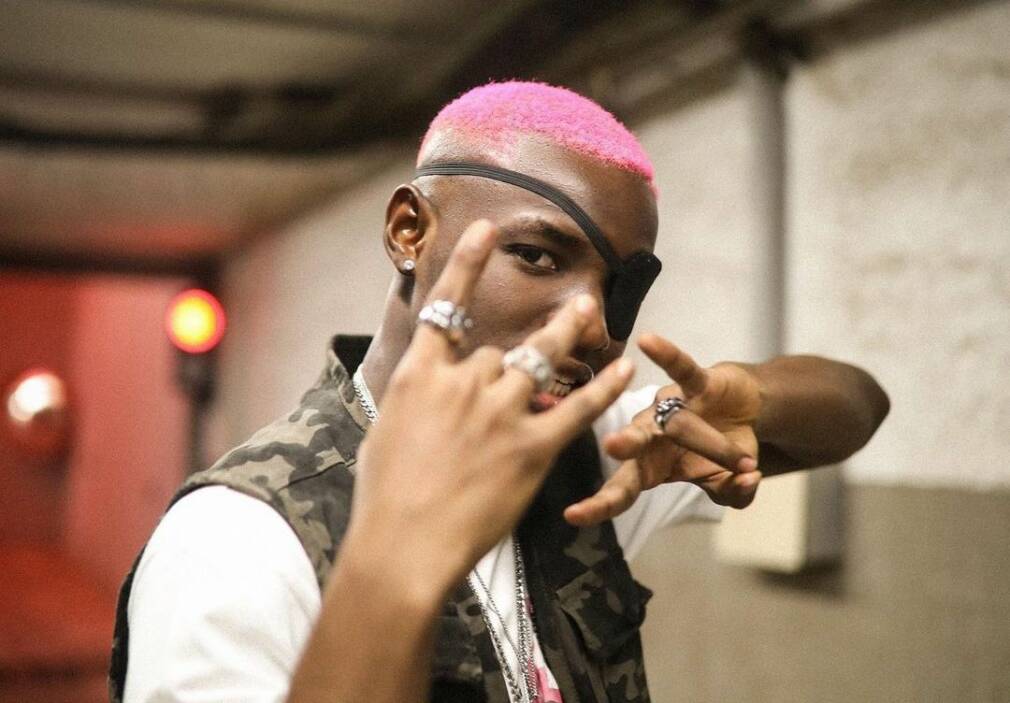 Ruger is switching things up

Ruger, the extravagant and unpredictable head of Nigeria’s new school talent talks about his social media come up, Afro-dancehall sound, and working with the prophetic D’Prince on his latest EP Pandemic.

With his off-the-top delivery, virile lyricism, and pirate-esque eye-patch matched with pink hair, Ruger has proven to be a more than worthy envoy among the emergent new talents piloting the remarkable ascent of Afrobeats around the world.

Born Michael Adebayo, the singer spent his formative years absorbing various sounds ranging from Fuji music by the likes of King Wasiu Ayinde (K1 De Ultimate) to R&B by American artists like Boys II Men. After a stint of misfortune, unable to get into the university, he took an apprenticeship in phone repairs at Computer Village, Ikeja, a popular ICT market in Lagos. In his spare time, he leveraged social media to project his musical abilities with high hopes of immediately being discovered. His hopes were quelled after the first few trials and quickly resorted to just enjoying the process. However, months later, he landed on the radar of D’Prince, head honcho at Jonzing World and former member of Mavin Records. Following his terrific run as an artist, D’Prince is lauded for the discovery and assisted development of Rema. He is also known as the younger brother of legendary Afrobeats producer Don Jazzy.

Before Ruger’s signing to Jonzing World/Sony UK, he’d undergone stealth artist development for about a year. A time the singer admits was fairly trying due to the uncertainty of life going back to normal. “I didn’t know if I’d ever get to show the world who I am, travel and pursue my dreams,” he says.

In the first quarter of 2021, his unveiling was backed with two singles that barely cut through the noise until the release of his five-track EP dubbed, Pandemic which houses records like “Ruger”, “Abu Dhabi”, “Bounce” etc. Like a slow burn, “Bounce” took a life of its own to become one of the hottest songs in Nigeria, having hovered around the hotspot of Nigeria’s Apple Music before peaking at the chart’s zenith. The remix features Nigerian-born UK sensation, Midas the Jagaban.

In July, the self-touted Afro-dancehall artist signed a residency agreement with Lagos-based hospitality powerhouse, Eko Hotel & Suites. The six-concert deal will see him perform once a month starting from August. Ruger has since embarked on a nationwide tour across cities in Nigeria and recently thrilled an audience of 20,000 attendees at the 02 Arena where he performed as Burna Boy’s headline.

We spoke to the singer about his meteoric rise, his approach to Afro-dancehall and the new generation talents dominating the Nigerian music scene.

When did you realize that you’ll be pursuing a career in music?

I’ve always known from childhood. My family loves music hence I was surrounded with different kinds while growing up. We attended a lot of parties in my then-neighbourhood and it’d rain music. Listening and vibing to music is like reading and assimilating unconsciously. So, I believe I’d assimilated a lot of vibes unconsciously by the virtue of growing up in that space where all music lives. By the time I was in high school, I already knew music is what I wanted to do and here we are.

What did your parents think of this at the time?

Interestingly, I didn’t speak much about it to my parents. I was home but for some reason, it wasn’t something we talked about at any point. I was just doing my thing while they watched until it clicked.

There wasn’t any pressure around furthering your education, like many Nigerian parents?

Honestly, I won’t call it ‘pressure’. It was just the next logical thing for me to do after trying to get into the university several times. My parents were understanding of the situation and encouraged me. In that period of seeking admission into the university, I got working, just to gain knowledge from other fields. I worked at the popular Computer Village in Lagos. I started as an apprentice at a store that fixed phones before becoming an engineer after some months. I gained all that knowledge, learnt some new things, so there wasn’t any pressure whatsoever and by the third year, I met D’Prince.

What kind of music did you grow up with?

Now, I feel like I listened to everyone at the time because everyone in my family loved different things. My mom and dad loved Fuji, typically as I’m Yoruba. My dad sometimes listened to Bob Marley, my sister was into R&B with Mariah Carey, Brandy, Boys II Men, so I was subconsciously assimilating all these. As I grew up, I started to discover more sounds by myself. From friends and new people I met, I got to discover new things. Basically, I listened to everybody from Africa, Jamaica, and everywhere.

What do you reckon as a buildup for what you sound like now?

Initially, it was based on everybody playing what they liked and me absorbing them subconsciously. I started to choose what I like when I started doing music. I chose reggae, dancehall, Fuji etc. I get a lot of inspiration from Sean Paul, Popcaan and still listen to King Wasiu Ayinde a lot. So, I just try to infuse all that while making music.

The eye patch, pink hair are noticeable assets about the Ruger brand. Do they hold any significance?

I want to portray realness. There are lots of sides to Ruger and this is me bringing out as many sides as I can. I have the pink hair which balances the hardness in the eye patch. The pink hair is showing that I could be sweet too. There’s the hard and sweet facets of my image. The idea is switching things up and showing them that I can be whatever.

How did the name ‘Ruger’ come about?

Ruger is the name of a gun brand. It was given to me by D’Prince when I just started recording under him. He started calling me that when he saw how I vibe while recording. I make this gesture with my hand like I’m aiming at something. At first, I didn’t own up to the name but as time passed and my sound started to evolve secretly – in hotel rooms, in my room, in private studios – I eventually owned up to it. God blessed D’Prince with the ability to see the future.

How would you describe your state of mind while you made covers on social media?

What was your first reaction on getting a DM notification from D’Prince?

I slept a little immediately, until my sister called my attention after he texted me again. Apparently, he’d thought I didn’t want to respond. That was when I knew it was time to comport myself and reply calmly. He promised that we’ll rendezvous when he’s back as he was on tour with Rema at the time. Interestingly, I was going to audition at a talent show the day he called for us to meet. Of course, I ditched the talent show to meet with him.

How would you describe your style of music?

I like to call my signature style Afro-dancehall, where I blend Afrobeats, dancehall, my patois and pidgin english. It’s not exactly a new genre because a lot of people from General Pype to Patoranking have been doing it for a long time, so I’m not exactly trying to create a new genre. I’m only coming in with a different, more modern and confrontational flavour. As one who listens to his own records as a fan, I daresay it slaps.

What was the creative process of Pandemic EP like?

I made the whole vibe during the pandemic when lockdown was still intense. There was a lot of uncertainty and I didn’t know what was going to happen, if things were ever going back to normal where I get to show the world who I am, travel, pursue my dreams etc. I managed to put in work while managing my mental state. The hunger remained amidst the chaos and I channeled whatever feeling – anger, love – I was trying to pour out, into the mic. I call it an ‘isolation wonder’.

Why was releasing that project important to you?

I wanted to switch the game up a bit. The kind of crazy whereby some songs just shoot right up the chart is what I’ve always wanted to do. Look at the Apple Music chart, new school talents are predominantly running the Top 10. The game has switched and I’ll say the Pandemic EP contributed to that. When the EP dropped, a lot of people had to sit back and check what they were doing. I’m grateful for that kind of blessing that God has given me.

“Bounce” has gradually become one of the hottest Nigerian records this year. Tell us about creating it.

It was actually based on vibes; just chilling and making music. Some people might say my lyrics are too hard to memorize but I can’t water down the intelligence I have. I’m the type that gives his all to music and intelligence is all that I have, so I’ll give it. When I recorded “Bounce”, my producer suggested that the lyrics be watered down a bit because it might be difficult for people to sing. I didn’t budge but look now, some people may not know the lyrics but they’re definitely dancing to it.

Did you have an idea how far it would travel?

I didn’t but D’Prince did. Like I said, God has blessed him with the gift of foresight. Before release, he said “Bounce” would be a crazy song and everyone would like it.

Did any record in the project give you a harder time compared to others?

That would be “Bounce”, because it took me about a week to record. Sometimes, I didn’t like the texture of my voice. I would get so angry and leave the studio to rest my head before coming back days after. I might get a texture of the hook and before the second verse, I’m not getting the texture I want to use again. This happened several times. It was so difficult but thankfully, we succeeded and here we are.

Which of them means the most to you?

“Bow”, because I said to myself that when I succeed, people who treated me like nothing will attest to my greatness. That record was me prophesying and as there’s power in the tongue, I prophesied that anytime they see me, all of them must bow.

What’s next for Ruger?

A lot. Just know that whenever Ruger is coming out, he’s coming out with something refreshing and different from what he did.