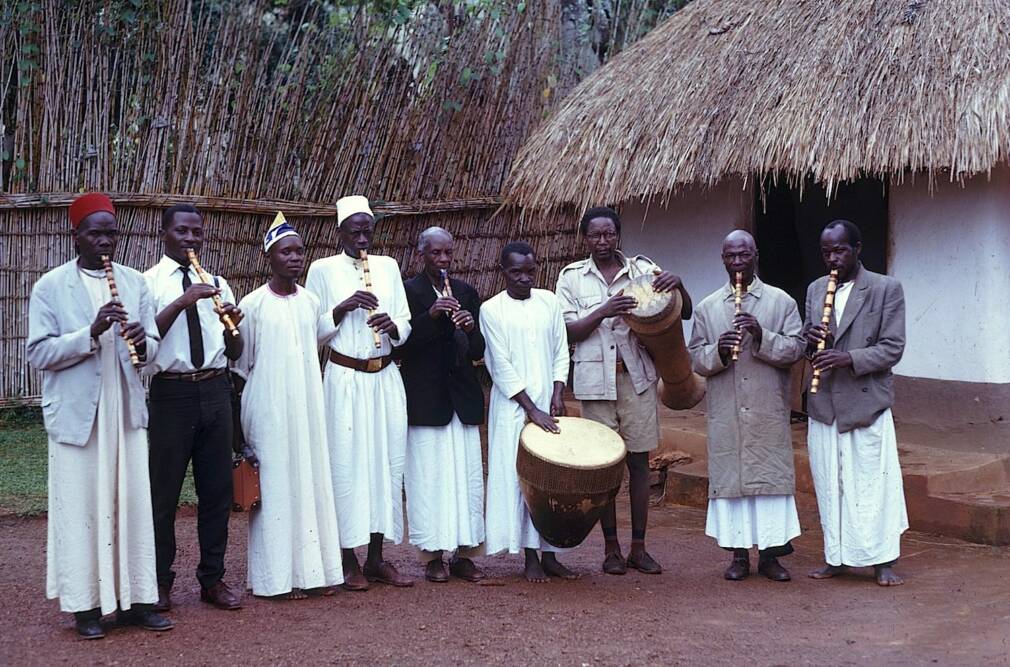 Musicians of the Buganda royal court, once scattered across their kingdom after the violent Mengo crisis of 1966, gather together again to keep their musical tradition alive, recording their lyres, fiddles, and drums ensemble to be released on Nyege Nyege Tapes.

Tapping into a tradition that dates back to the 14th century, the Buganda Royal Music Ensemble is a revival of a scattered heritage. After Prime Minister Milton Obote conducted a military invasion on King Kabaka of Buganda, Mutesa II’s royal palace in 1966, the court musicians either fled or were killed, leaving the royal tradition waning in the new realities of daily life.

However, a group of veterans have banded together to collect recordings made in the late 1940s and are presenting them alongside recent recordings featuring old and young musicians who still carry on this musical tradition.

The recordings, both new and old, are bursting with many drums, imbued with the chants and song of vocalists, and layered deeply with xylophones, flutes, lyres, and more. These sounds are accompanied by an official trailer of the Buganda Royal Music Revival documentary, following these musicians journey fighting against oblivion, and some, playing before the current King Muwenda Mutebi II.

Throughout the album, “we’re introduced deeper to an array of instruments and textures, like the buzzing Bugandan lyre (endongo) by contemporary royal player Albert Bisaso Ssempeke, the resonant akadinda xylophone with its 21 large wooden keys, Temutewo Mukasa’s restless praise sung with his harp (ennanga), the hand-made gourd trumpet (amakondere), the entenga “drum-chime” and its core set of 12 drums tuned like the amadinda xylophone, or the tightly intertwined melodies of the flutes ensemble (abalere). With the music, the hissing and swishing sounds of old tapes remind the listener of the long process, from the original recording to its archival digitization, that allows the talent of past musicians to still vibrate nowadays.”