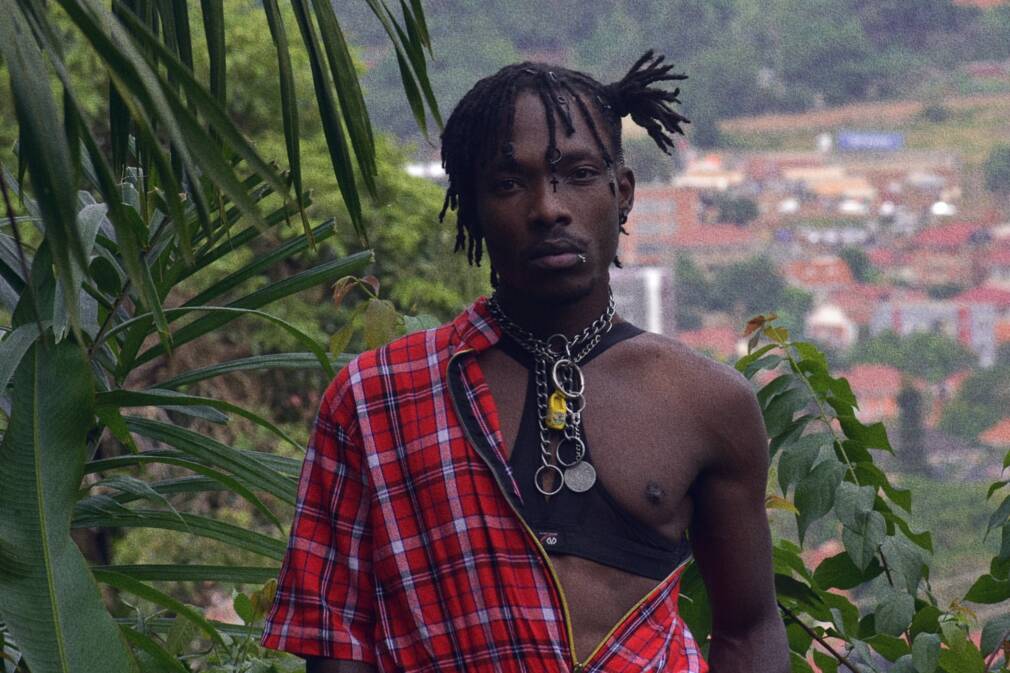 The Anti-Mass collective has just released DOXA, a first EP embodying electronic queer resistance in Uganda. We spoke to Nsasi, one of the masterminds behind the team.

On first hearing, DOXA may sound harsh and difficult to understand for fragile ears. However, it is through this noisy, sometimes aggressive but still club-friendly music that Nsasi and his accomplices Turkana and Authentically Plastic call for freedom of expression for their queer community, still extremely marginalized in Uganda. Driven by both a desire for rebellion and technoid exploration of African music, the trio models rough textures overhung by polyrhythmic percussions that flirt with gqom, noise and acid music. A sonic experience that surprises at every turn, as danceable as it is destabilizing. Hailing from the conservative town of Jinja, Nsasi has always lived on the margins of a society that didn’t suit him, following in the footsteps of his idol Tshala Mwana, a scandalous pop icon from the 80s. Today, he tries to find the balance between living dangerously and expressing himself freely, clinging to traditional rhythms with his eyes focused on a future he hopes will be as peaceful as possible. Invited to our PAM Sound System show for an intense and introspective mix, the indomitable Nsasi also took the time to answer our questions.

How did you meet with Authentically Plastic and Turkana, and how did you decide to start the Anti-Mass crew?

Authentically Plastic and I were introduced by a mutual friend at the time at a queer friendly bar in Munyonyo Kampala. We became “fast sisters”. The love for partying and music became something that we bonded over, while queer became something we have in common. Authentically Plastic already had a well thought out idea of what she wanted to start with Anti-Mass at the time, as I mostly gave part time assistance in finding locations for the events when they happened. Being in a community that has constantly been a target of police raids, it was a relief to find that we had an opportunity to build something for us to thrive in and grow as queer creatives in Uganda.The crew was already in existence because we both hanged out together as friends at parties. Basically it all happened organically as we were all friends at the time, including other members of the crew such as the manager Bobby Kolade and Raldy Odil, a performing artist.

What is the philosophy behind Anti-mass, and what does the term mean ?

Anti-mass represents a section of the marginalized, and looks to support queer people with more than just party spaces. The desire to create and have safe spaces of expression in a regressive social and political climate. This fostered the idea of Anti-Mass. Anti-Mass as a term, I remember the early days of interaction with Authentically Plastic, I asked her what it meant, and the response was more in reference to “a congregation of freaks” and “non church goers”. We used to frequent a “Sunday-Joint” called Ram Bar that, by the way, was closed after constan raids by the police that targeted queer people. So we basically thought we needed to create more spaces that are queer friendly and basically have a strong door policy to parties, in order to curate crowds that are more respectful and less troublesome.

How do you combine your traditional musical roots with experimental/noise electronic music? What are your main influences?

I love experimenting with anything and everything. My traditional existence in music is almost limited, I mostly tend to guide my production with how I feel in the moment. The desire to create something unique and different makes me want to explore various elements. I like to feel “unruly” and “misunderstood” but with a relatable and groovy destination if I can put it like that. So until I can fully relate to what I am hearing, I would not consider it ready.

How difficult is it in Uganda to be a queer musician?

It can be a challenge if you do not have the freedom to fully express who you are in your art. Uganda takes away a big part of the creative queers because it is regarded culturely inappropriate to be queer so it is even difficult to identify as a queer artist. The systems are totally repressive to the queer creatives.

Is there more and more space in this world to express yourself?

In this world, no. The spaces are really limited and highly targeted with police raids and violent tendencies of homophobia. Nyege Nyege has however played a great role in bringing the idea of art and expression to more open-minded grounds, also creating this community where artists have free access to a studio and work together, share ideas in different workshops and have parties. This has its uniqueness when it comes to sieving out unwanted or rather toxic crowds using music and expression.