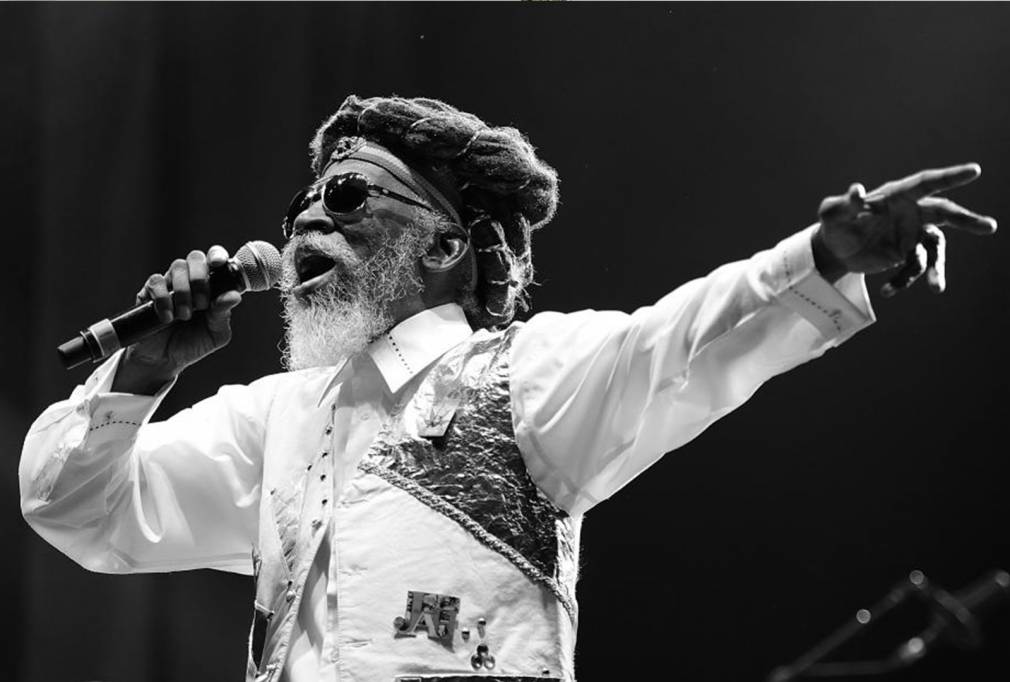 Bunny: the last of the Wailer wails no more

On 2nd March a collaborator of Bob Marley’s since the start and co-founder of the Wailers, passed away. He went on to have a long solo career, remaining fiercely independent and loyal to Rasta. PAM pays tribute.

The wailing has fallen silent as the last living Wailer has died in Jamaica at the age of 73, confirmed by his manager Maxine Stowe. Bob Marley’s collaborator from the start (and also his step-brother by marriage) had had a stroke in the summer and made several hospital visits since.

After Bob Marley left us in 1981 and Peter Tosh was assassinated in 1987, Bunny Wailer is the last of this mythical reggae trio to pass away. The Prime Minister of Jamaica, Andrew Holness, was the first to pay him public tribute, describing his death as “a great loss for the country”.

Despite his nickname “Wailer”, the last of the three pillars of the Wailing Wailers (Bob Marley’s original band) was rarely seen complaining and he never lost his faith in Rastafari. Even though he sometimes gave into the digital, Bunny watched over roots reggae like a careful father: sparingly and seriously. He also recorded some twenty solo albums, including two tributes to Bob Marley. Much more than just a Wailer, Bunny was also known as “Blackheart Man”, the lion man, the unfathomable, taciturn rastaman, who was rarely seen on stage and hated flying, preferring Jamaica’s zion to the sirens of showbizz. Over the years he’s been nominated for five Grammys, and won three.

Bunny Wailer was born Neville Livingston in 1947 in Kingston. He and Marley became friends as toddlers as Bob Marley’s mother, Cedella Booker, was dating Bunny’s father, making them brothers from the ghetto in Trenchtown. In 1963 they formed the Wailers with Peter Tosh and in 1965 their first album Wailing Wailers was released (which included their first hit “Simmer Down”, released on Sir Coxsone’s label Studio One).
The house trumpeter at Studio One, Johnny Moore, who was involved in the recording of “Simmer Down” remembers, “the first time I met Bob and Bunny I was working with the Skatallites on Brentford Road [at Studio One]. They came in with Peter Tosh and the other kids they were with at the time, like Junior Braithwaite. We saw that there was something unique about these young people and we tried our best to help them grow their talent. At the time they had something in their music that was reminiscent of the Impressions, and then they evolved and managed to create their own sound. That’s what we wanted to hear in the studio: music with a Jamaican feel, something popular from here rather than something from the USA or somewhere else! Even today their music is still very powerful. At the time that we were recording there were four or five of us on a microphone. If we did something stupid we would have to start all over again so we didn’t make a single mistake!”

Shortly after this recording, Marley left the country to work in the United States in a factory in the state of Delaware, while in 1967 Bunny was imprisoned for more than a year for possession of marujana. Upon Marley’s return and Bunny’s release, the Wailers reformed and set Jamaican studios on fire with the reggae they made. They worked with Cosxone, Lee Perry and Leslie Kong, the latter of whom was vilified for wanting to record an album called Best of the Wailers. Bunny’s response to this suggestion? The best of the Wailers is yet to come!

After meeting Chris Blackwell from Island Records, the best thing to come from this period of the trio’s history was their encounter with Western audiences, popularising reggae around the world.

The Blackheart Man goes it alone

In 1976 the Wailers went their separate ways, marking the end of the trio formed with the militant Peter Tosh and the mystic Bunny Wailer. Marley released the album Natty Dread, and Bunny recorded one of his most beautiful albums, Blackheart Man, on Island – the same label as Bob. Bunny spoke particularly about the character of the blackheart man, and the reincarnated souls who mark the world’s entry into the famous Age of Aquarius, a cycle into which the lion of rasta entered on 2nd March 2021.

Perhaps two rastamen was too much for Island, and Bunny Wailer went on to create his own label, Solomonic Records, upon which he released his magnificent 1977 album Protest, where his falsetto charmed the world.
In a number of documentaries it was common to see Bunny flying the flag for the fabulous trio who put reggae on the map. However it was the American rapper Snoop Doggy Dog who brought Bunny bursting back onto screens in 2012 during his filmed voyage to Jamaica, Reincarnated, in which the turbulent doggie of US rap goes to pay homage to the old lion of reggae, and learns as much about the idea of reincarnation as he does about his musical heritage. On an island where music is constantly being recycled, there is no doubt that Bunny Wailer’s musical soul will find its rightful reincarnation.

Ruger is switching things up
Interview