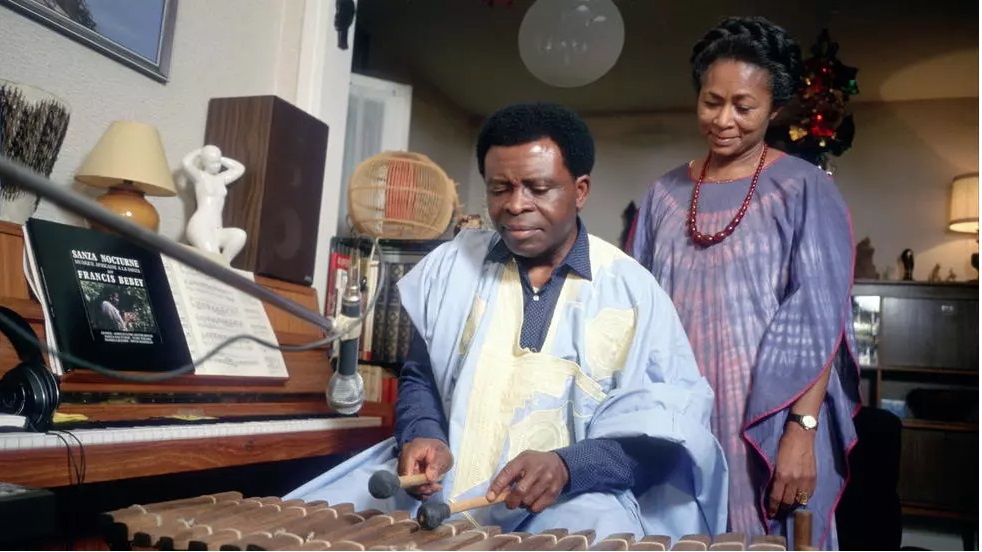 Francis Bebey and his wife Made in the family’s flat on Rue du Champ des Alouettes (photo P.R. Worms)

Francis Bebey left us twenty years ago. After Kidi and Toups, it is now the turn of Patrick, a musician, to share with us a musical memory of his father. He has chosen to dive into the album Dibiye, which has recently been reissued. Read our interview.

On this album, Dibiye, the family is all together. When did you start accompanying your father on stage?

Me and my brother Toups began joining my father on stage in 1983. He had this great tour in Tunisia – about ten dates at the Carthage Festival – and that’s when it started. I was 19 and it was great. We were with a bass player called Ahmed Barry, and even our mother came along. She never usually came, but she had to witness our debuts.

It was really a special tour because my father knew that his song “Agatha” had made a mark in many sub-Saharan countries, but he had no idea that it was really well known in Tunisia too. During this tour – from the very first concert – we would go on stage and before the first song started, the audience were shouting “Agatha! Agatha!” We had planned to play it but later in the concert so…we stuck to our program. After the first song, the audience applauded politely, then started shouting “Agatha!” again. We held on until the 5th song and then we just had to play it, otherwise the audience wouldn’t calm down! So after two or three dates our father decided that we should play it at the beginning, another time in the middle of the show, and a short reprise at the end.

16 years later, you and Toups were with your father to record Dibiye, his penultimate album. How did this (family) album come about?

I’d wanted us to make a record like this for a long time. We would come back from school each day and he’d have written a new song that he would play for us. He’d ask us what we thought of it and sometimes I’d say ‘that’s good but here you could turn the guitar up, and this voice, maybe turn it down a little bit’. And he would say ‘oh no this is the finished piece! I did it the way I wanted! You can do what you want with it, but I’m moving on now.’ He didn’t have big multi-track recorders so he couldn’t change things. He made a lot of albums like that and sometimes I’d think, ah that’s a pity, by producing a little differently we could’ve maybe reached a wider audience…And then, in the 90s, I met Vincent Mahey (sound engineer and founder of Sextant Studios – Ed.). We became friends and in 1995 we went on tour with Papa Wemba. I made Vincent listen to an album of my father’s. Vincent loved the music because his big brother had made him listen to it. I said to him, listen, I know you have a studio and I would like us to convince my father to come and record. It would be great. My father said “yes, well…OK!” So we ended up in the studio! The idea was to rehearse a bit beforehand; there were some new songs, especially “Dibiye”, which we had started to edit in a hotel room in Germany. We began rehearsing and, little by little, Vincent set up a microphone, then a second one, and finally after three days everything was in place, and we were in place too. Up until then, my father had been kind enough to make us believe that we were the ones leading the dance. But when it came time to record? Forget it, he was in charge! But with great delicacy. They were incredible sessions and we had so much fun!

He left the mixing to us. Everything had been recorded live and we just added a few spices, like in “Stabat Mater Dolorosa”. He was very happy hearing the final mix. He was moved.

In Dibiye there is of course some sanza, but also the Pygmy flute that he loved and of which he became a sort of ambassador. This flute was played in one of Arcade Fire’s hits. Do you think, like sanza, it has become part of your father’s legacy?

He strengthened me by saying, “don’t forget these instruments, they are the basis of everything”.

He allowed me to tame them, and I realise how magical it was and how important they are in my life. It’s true that he defended them a lot, and I too like to take them everywhere with me. Even if one time, in Germany after a concert, a person said to me, “it was a wonderful concert, I loved it! Especially the pieces that you played with sanza there. Do you play it because you heard it on the latest Whitney Houston album?”
Patrick laughs, this punchline being really reminiscent of the absurdity we get in Cousin Assini – Ed.)

Dibiye, Pee Wee music, expanded edition to be released on 28 May 2021