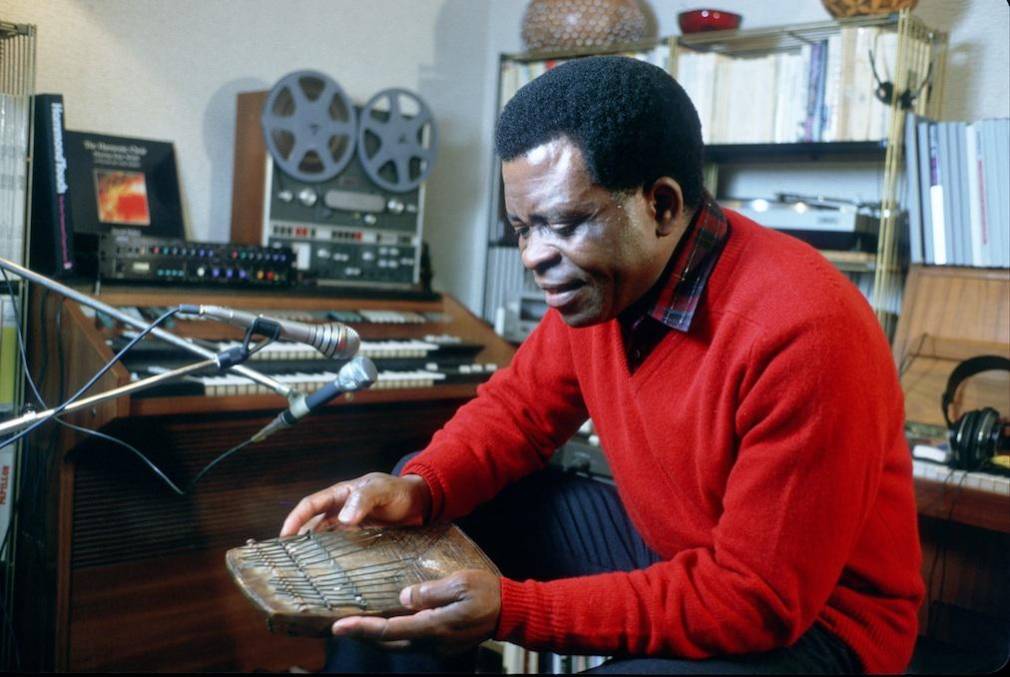 This week, three of Francis Bebey’s children will talk about a song or an album by their late father. Today it’s Toups’ turn – a musician like Francis. He has sent us “Tumu Pakara: the concept of a positively affirmative slap”.

That bass
That particular phrasing
The introduction of the piece with one stanza, and then a second

The general atmosphere of the song, which may bring to mind so many recordings made by “[his] friend Duvelle”, that is Charles Duvelle, the man to whom I owe the childhood travels I made all over the world – in my head. (Of course this ethnomusicologist with thousands of recordings and co-founder of the OCORA label was friends with the author of the first reference book on the music of the African continent. Especially as they both shared the same passion for J.S. Bach. Thank you Charles for the Javan gamelans! And thanks also to Alain Damasio for having known how to talk about and keep time with the music in a magnificent moment of appeasement and open-mindedness on your work “Furtifs”…but I think it’s probably time I closed these brackets).

This powerful “majestic pain” as the other Charles would say
This power
The voice enters the scene.
Strange, I hear two of them. Diphonic singing, an ancestral technique.
This feeling of the strange and the intangible

Perhaps the tuning is at 432Hz, the “happiness frequency” to which all music intended to do good in nature – to mammals, to plants – is tuned and therefore, incidentally, chases away human disorder? The entrance of the murky, hoarse voice doubled up derails me: is it reasonable to summon the spirits in such an overpowering way?

The piece flows, moves, unfolds with a relentless groove that nothing can stop, despite being made up of almost nothing (in my memories at least, and there’s no question of listening to it again, it would be too simple, the instrumentation is rudimentary). It has a wicked groove – what the Americans might call “bad” (or the Brits ‘sick’– I’ve changed the French slang to British to make it make sense in English – translator’s note)

Tumu Pakara was a blind and rather old beggar. He would set himself up in a strategic place along the street where, to make a living, he would sing a capella. Well almost – he would shake the coins he’d collected to make a beat. Without rhythm, there is no music.

It is Francis’ tribute to childhood memories. A Francis who never cut his ties with childhood, as we can see in his final novel – which also won a literary award – Rain Child.

Here we hear a Francis who never cut ties with anyone here on earth. It’s is a fact that has been explained perfectly well by Michio Kaku (the American astrophysicist of Japanese origins) through quantum physics, while the veteran poet Birago Diop came to the same conclusion long before him: once and for all, “the dead are not dead”.

“Tumu Pakara” is a memory from my post-adolescence, from the album Sanza Nocturne. It came as a complete surprise, of the kind I would have with the album Lambaréné Schweitzer.

Due to its stupifying effect the song is comparable to the slaps administered by Lino Ventura in the film Let’s Not Get Angry. It would be a mistake to not turn the other cheek.

And it is comparable above all to the last sunny images of Souleymane Cissé’s film Yeelen / La Lumière for it’s sense that it is guiding you with complete confidence, and the confirmation of the poet’s simple observation: ‘Wherever you come from, that’s where you come from’. Francis always had a fascination, admiration and deep respect for the sun, god of the ancient Egypt.