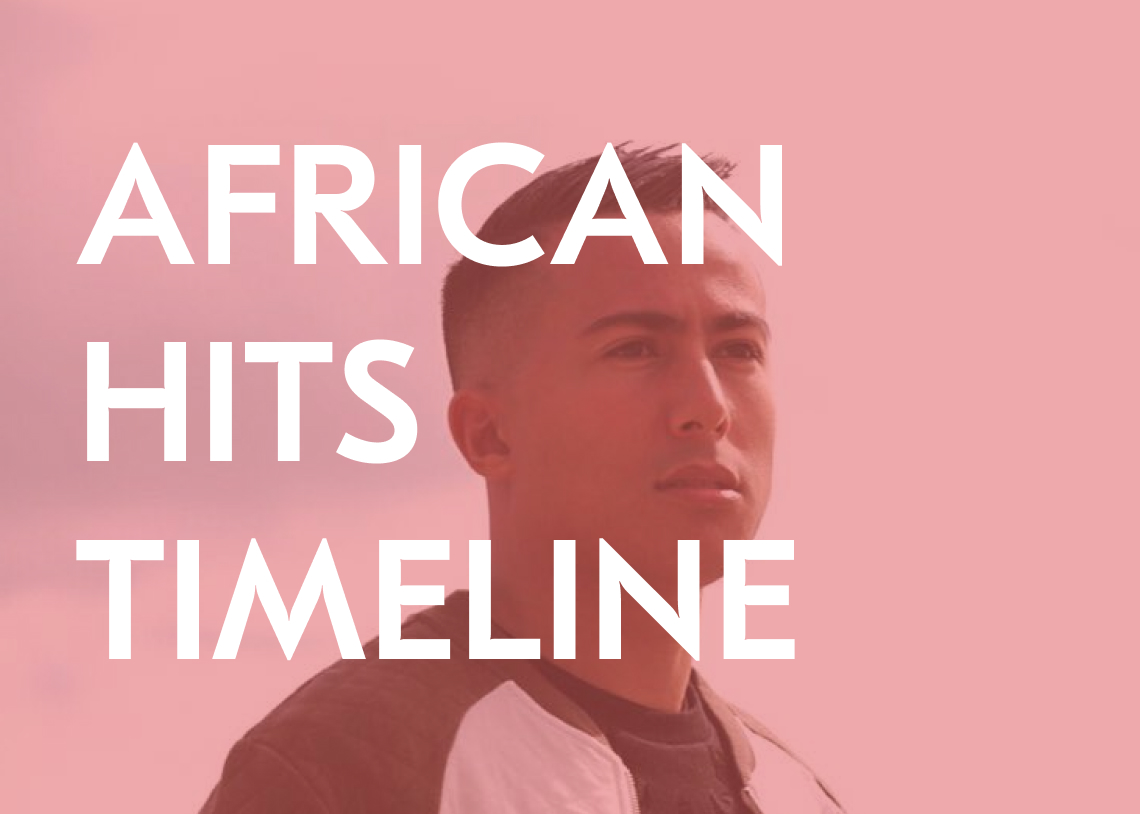 Here is the second part of our timeline for the African hits of 2017. From Nigerian pop to South African gqom, via Tanzanian bongo flava and Moroccan rap: a 60-track journey to discover the artists who nailed it on YouTube in the last 12 months!

Today in Europe, YouTube view stats are the new index for measuring the success of a track. But in Africa, where only 23.4% of the population have access to internet (against 84% of the Europeans, according to Internet Live Stats survey), this data isn’t enough. And not always available.

This is however a great piece of information that helps reveal the main trends that have appeared in the continent. With respectively 57% and 52%, Morocco and South Africa are the leading countries for internet penetration rates, and are two of the main online scenes for African rap in 2017. Far ahead Togo (7.3%) or Guinea (1.8%), for example. Tunisia (48%) set new records with artists like Balti (more than 118 million views on YouTube in only two months with the track “Ya Lili”). Africa’s most populated country – Nigeria (46%) – is still leading the pop scene (Davido, Wizkid, Tekno, Olamide, Runtown, Tiwa Savage).

Still, in a field where the dice are loaded, some artists managed to pull it off nicely. Tales of kifs, diasporas, new record stats or strong characters: these artists all caught our attention in 2017.

The 25-year-old raï’n’b singer Aymane Serhani has been active on YouTube since February 2013 and his video view numbers have already been through the roof. His series of three selfie-like films count more than 200M views on YouTube today.

Similar tracks: “Yamma” by 36-year-old Casablanca-based singer Hatim Ammor who made a name for himself thanks to his success at the 2M TV channel talent show (July 2017, +14M views on YouTube). “Moul Chateau” by 34-year-old YouNess, among the new voices of Moroccan raï (May 2017, +26M views on YouTube).

Featured in Africa’s biggest scores of 2017: Morocco’s rock star Saad Lamjarred, who has reached 108M views on YouTube with the single “Let Go”. Tunisian rapper Balti and his amazing success: “Ya Lili” was released last October and already counts more than 110M views!

Sidiki Diabaté, son of the famous Toumani (one of the few African artists to have won a Grammy Awards), has been performing on stage since 15 and gives sold out shows in his country’s stadiums. There they call him “Mali’s Chris Brown”. And in France he inspired Booba for the famous track “Validée” and recently was invited as a guest on the last album of the French boss of rap, Trône.

On the same tone: “Wari” by Tal B. Awarded “Mali’s Best Rapper” in 2009, the Halala – the worthy, the noble – called in Ivory Coast’s best rapper Didi B from the Kiff No Beat, to perform on this track.

Star in his own country, Dji Tafinha was a member of the jury for “The Voice – Angola” in 2015. The same year, the rapper-producer nailed it on the web with “Imperfeito”, of the album Independente 2 (Apollo), the follow-up to the first part released in 2011 (+2,5M views on YT).

Just because Ethiopian video clips keep popping up in our YouTube suggestions, and to discover them may sometimes be a happy surprise. Like this “Yagute” by Yared Negu and its 4 million views..

On the same tone: “Hana” by Temesgen Gebregziabher.

July, 27th – Let’s all do the motorbike dance aka the “booda dance” with Young Bullet (South Sudan)

Since the independence of South Sudan in 2011, the youth has found in music a way to express themselves and sing peace or just let off steam in pop music or dancehall – the two most popular genres of the country.

Since the release of the song “Ndutu” (Jan. 2016, +2.7M views on YT), Locko has been considered one of the greatest names of Cameroon pop music. He took part in Coke Studio Africa (a video show we’ve already covered in de December timeline).

It was released the same day: “Y.O.L.O” by Angolan rap’s boss NGA and member of one the most popular bands of the country, Força Suprema.

Olamide “the baddo” (tough nut) has been spotted at the beginning of the 2010s thanks to the yoruba and pidgin-spoken rap (a Creole language mixing English and indigenous languages) he performed on “Eni Duro”. Since then he’s released six albums – the last one in 2016, titled Glory.

* Bongo flava originates from “ubongo”, the Swahili word for “brains”. It is the nickname of Dar es Salaam, the birthplace of this music that has mixed elements of rap, pop, r’n’b and more traditional sounds like taarab.

This duo formed by Theo Kgosinkwe et Nhlanhla Nciza has been very popular since the release of the amazing track “Khona” (Apr. 2013, +10M views on YT) – produced by Uhuru, one of the country’s greatest hitmakers. The pair was awarded “Best Artist of the Year” three times at the SA Music Awards.

7Liwa is considered by many the best rapper of the new generation. He was spotted in 2016 in France as he performed with Lartiste on the track “Gonzales”. He penned some of Morocco’s biggest rap bangers of the last years: “Nik DT”,”Adidas”, “Haribo”, etc. With “Mimi”, excerpt of the mixtape #WF (for Wald Fatema, “the son of Fatema” in Dejia language), 7Liwa has almost reached the 10M views on YouTube in 2017.

October, 11th – Rapper Kwesta releases the the best track featuring a US artist of 2017 (South Africa)

With his unique voice tone and flow, Kwesta presents himself as “Da King of Afrikan Rap”. A status he’s logically earned since the release of the second part of the album DaKARi n 2016. The album offered the amazing “Ngud” featuring Cassper Nyovest (+4.9M views on YT). And just as if it was not enough, Kwesta chose to launch a duo with the rapper Wale in 2017. The result of the collaboration was the track “Spirit”, best duo “Africa/U.S.A.” of the year.

Wale and Africa: Since his first trip to Nigeria and the release of the tribute track to Fela Kuti “The God Smile”, the rapper multiplied the collaborations with fellow countrymen artists. In April 2017 he invited Davido, Olamide et Wizkid on his latest album, Shine.

As this is often the case for most of the biggest names of African music, the popularity of Jah Prayzah – an artist who won a MTV African Music Awards in 2016 – has grown on the continent (and especially on YouTube) as he was releasing featurings with stars from the neighboring countries.

Among the most popular songs, “Watora Mari” with Diamond Platnumz, “My Lilly” with Davido and “Sendekera” with Mafikizolo.

* for “soldier” in the Shona language mainly spoken in  Zimbabwe. Jah Prayzah has earned this nickname for the military outfits he’s used to wearing on stage.

What a good day to wake up and rap, as A.L.A puts it on “Nharzin” (“what a beautiful day”)! His solo adventure – A.L.A has started his career in the band ZZH.5 – was officially launched on YouTube in June, 2017 and his channel already counts more than 36 million views (a record reached with “U.Z.I” and its 11M views).

And in order to make these rap mornings even happier, A.L.A called in Moroccan rapper Toto on “Nharzin”: the artist is famous in the neighboring kingdom, and signed the great track “Pablo”, produced by Hades. The Moroccan rap’s idol has noticeably worked on Fantôme, the latest album of French rap‘s veteran Rim’K.

October, 26th – Algeria will always be the country of raï – Cheb Bilal,“Romantique” (Algeria)

Tiwa Savage might well be “Nigeria’s Beyoncé”. Signed to Don Jazzy’s label – one of the most powerful artists of the continent – and managed by Jay-Z’s firm Roc Nation, the multi-awarded singer has launched the new EP Sugarcane in September 2017. This six-track record offers the hit “Ma Lo” featuring Wizkid (+9M views on YT).

Recommended: “La Boca” by Nix feat. Omzo Dollar. Active in the rap field for more than 20 years, Nix is a treasure of the musical genre for West Africa. He’s left a great mark in Senegalese hip hop with the band Kantiolis and has released many solo works, among which Excuse My Wolof – released in 2016 with an EP and the song “Badou Meun Lepp”. The follow-up is an album that should be launched soon.

November, 20th – The Sauti Sol are still the boss of pop music (Kenya)

Since the release of “Sura Yako” (Sept. 2014, +5.6M views on YT), excerpt of their third album Live and Die in Africa, the Sauti Sol are the leading band of Kenyan pop scene. The group has multiplied featurings with artists from other countries, which earned them a strong leading status at home as well as abroad.

It was released the same day: “Yasis” by rapper Youngsta CPT – and his 27 mixtapes! – who was awarded “Best Lyricist” at the SA Hip Hop Awards 2017.

Don’Zer made a huge buzz in 2017 with the track “Goudronnier” (ragman, ragpicker) that tells the daily art of being street smart when you’re an unfortunate thug living in the poor areas of Libreville.

Recommended: “Piccolo” by “the boss of your boss”, Gabonese rapper Zyone Stylei.

For the remix of “Mat Za Ronga”, the young Tunji called in heavyweight artist Khaligraph Jones.

Released in June 2017, “Mat Za Ronga” is an ode to the matatu minibus, Kenya’s most popular public transportation. This vehicle has turned into a surprising cultural phenomenon: the drivers use to pimp their vehicles with flashy decorations, plasma screens, loud sound systems, etc.

With “Ghetto”, Ariel Sheney signed one of the major tracks of 2017. Released last September, it counted up to 2M views on YT until Sheney’s former mentor Arafat DJ decided to take it down in November (the rapper was a member of the YoroGang, Arafat’s artistic structure). Ariel Sheney has since resumed a solo career.

Prodígio, another member of the band Força Suprema with NGA, has uploaded tens of videos on his YouTube channel last December. They’re tracks from his latest album Lua, released on December, 28th.

LCoke Studio Africa is a TV show broadcast on 30 different TV channels of Africa and has offered great encounters with artists for a few years now. The 2017 lineup has featured singers Youssoupha (DR Congo), Locko (Cameroon), Yemi Alade (Nigeria), Dji Tafinha (Angola) ; producers Nahreel (from the Tanzanian duo Navy Kenzo) and Sketchy Bongo (Soutjh Africa) ; and artists who recorded special collaborations. A great example is Nasty C and Runtown who sang together on a music written by Shado Chris: a few minutes that brought together South Africa, Nigeria and Ivory Coast, with Coca Cola company’s colours in the background.

A day with Ariel Sheney
Video