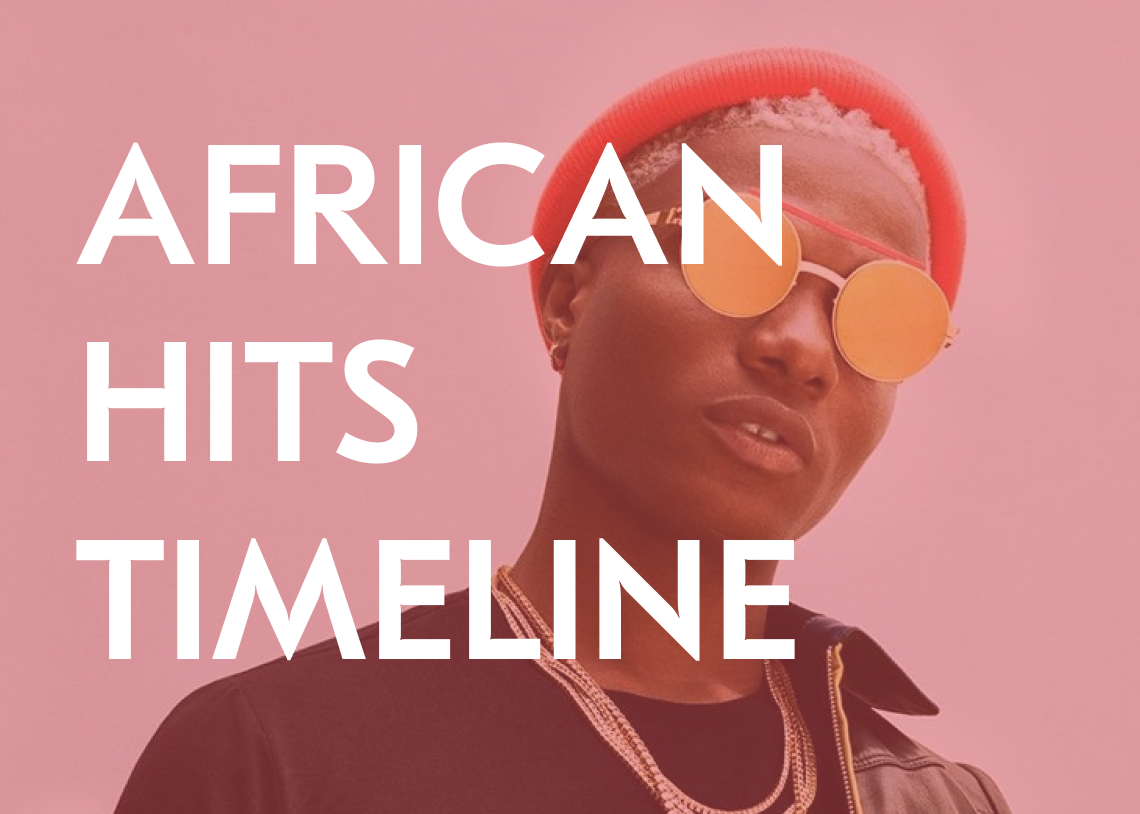 Nigerian pop, South African gqom, Tanzanian bongo flava or Moroccan rap. Here is our timeline for African hits of 2017: a 60-track journey to discover the artists who nailed it on YouTube in the last 12 months… but not only!

Today in Europe, YouTube view stats are the new index for measuring the success of a track. But in Africa, where only 23.4% of the population have access to internet (against 84% of the Europeans, according to Internet Live Stats survey), this data isn’t enough. And not always available.

This is however a great piece of information that helps reveal the main trends that have appeared in the continent. With respectively 57% and 52%, Morocco and South Africa are the leading countries for internet penetration rates, and are two of the main online scenes for African rap in 2017. Far ahead Togo (7.3%) or Guinea (1.8%), for example. Tunisia (48%) set new records with artists like Balti (more than 118 million views on YouTube in only two months with the track “Ya Lili”). Africa’s most populated country – Nigeria (46%) – is still leading the pop scene (Davido, Wizkid, Tekno, Olamide, Runtown, Tiwa Savage).

Still, in a field where the dice are loaded, some artists managed to pull it off nicely. Tales of kifs, diasporas, new record stats or strong characters: these artists all caught our attention in 2017.

First appeared in the 2010s in Durban’s townships, this raw and minimalist music initially was an alternative to what was playing in South African big clubs and radios. It has even developed its own circuit of parties – in-house, dive bars or block parties – its own dance called “bengha” and its own icons – Naked Boyz and DJ Lag (head of reference label Gqom Oh!). Gqom is the voice of the underground. It has become the new hype soundtrack of the world today and South African had better ride its wave. Bhizer got it right, with the success of “Gobisiqolo”, among the most viewed South African video clips on YouTube in 2017 (+4.3M views).

At only 19 years old, Tenor is the new ambassador of kamer rap (“Kaba Ngondo”, +1.3M views on YT). In 2017 he brought the house down with bikutsi singer Mani Bella on the track “Dérangé” and he rapped about “the small lights that dress the darkness” of love nights on “Bad Things”. He was the first rapper of the country to be signed to Abidjan-based Universal Music Africa.

Flex is one of richest-artist-on-the-continent Akon’s new signed act on his own label Konvict Kartel. It’s an update version of his legendary Konvict Muzik label he earned his fame from, thanks to such signatures as Lady Gaga, T-Pain, P-Square and Wizkid. In 2017 Flex finally appeared with his boss on “Holy Ghost Fire” (+1.2M views on YT).

Soul Bang’s was laureate of the “Découvertes RFI” awards 2016 and released his second album Cosmopolite in March 2017, six years after Dimédi (“child” in Soussou language).

With his hiplife (Ghanaian afro-rap), Sarkodie makes the whole continent dance. “Adonai” has become a classic track (June 2014, +47M views on YT). In June 2016 he hit hard on “No Kissing” with Nigerian singer Patoranking (+31M views on YT). Then in 2017 he stood out next to Runtown (new idol of the naija scene who could release an album of only tracks featuring Wizkid) with “Pain Killer” (+9.5M views on YT).

This was released on the same day: “Phone” by Tanzanian artist Ben Pol, considered the little prince of R&B (+2.1M views on YT).

CMr. Leo and producers Salatiel and Akwandor made a name for themselves with “Jamais Jamais” (Oct. 2016, +7.1M views on YT). Since then, the trio has developed a Cameroon-style pop music that is highly marketable abroad. Like Locko, Magasco and Minks who feature on the track “Power” next to rapper Tenor (Nov. 2017, 1.3M views on YT). Then Salatiel even signed the biggest hit for Cameroon in 2017, “Calée”, performed by singer Daphné (March 2017, +1.3M views on YT).

With “BRM BRM BRM”, 23-year old T-Flow The King signed the anthem of his hood (+9.4M views on YT). A sung rap track that tells the desillusion of a forgotten and lost youth, excerpt from his mixtape Je suis le Roi (“I am the King”).

In less than two years, Mr Eazi has bankulized afropop from Lagos to Paris with a music style renamed Banku Music – for “banku”, a Ghanaian meal. This name reveals the story and the inspirations of this Ghana-based and Nigeria-born artist whose banger track “Leg Over” (+28M views on YT) was remixed by Major Lazer (Sept. 2017, featuring French Montana and Ty Dolla Sign).

The young Prince Kaybee is South African house music next star. The last of a 36-children family, the 27-year-old producer was awarded a gold record for his debut album Better Days and he composed one of the biggest hits of 2017 with “Charlotte” (+3.9M views on YT).

Since “Dami Duro” in 2012, Davido has been considered the coolest kid in Africa, a reference to his track featuring South African rapper Nasty C. Alongside Wizkid, he’s part of these few Nigerians ruling their own empires – and featured in Forbes’ richest African people list. They are real trendsetters for the music world thanks to perfectly marketed songs, and they help put Nigerian-style pop even more beyond the rest of the production (the “banana fall on you” of the track “Fall” represents +57M views on YT)

This was released the same day: “Kijuso” by Tanzania’s favorite Rayvanny.

With “Sitya Loss”, Eddy Kenzo established himself as Uganda’s reference at the international level (Sept. 2014, +6.1M views on YT). He even performed the track on Ellen DeGeneres’ US TV talk-show and was awarded at the 2015 BET Awards.

“Sexinini arranger” Serge Beynaud (he first penned songs for various artists) is one of Ivory Coast’s great musical figures and is responsible for the great beynaumania that has started in 2009 with the hit “Kouma Lébé”. With “Akrakabo”, this coupé-décalé’s dandy icon, who’s been active in music for more than ten years, proved once again that he’s among the best. Or even the best of them all.

Now one of the masters of rumba, Ferré Gola aka “Jésus de Nuances” was part of Wenge Musica and Wenga Musica Maison Mère de Werrason (the orchestra founded in 1997 after the disbandment of Wenge Musica, a major group of Congolese music that invented ndombolo). His fourth album QQJD, released in June, featured the single “Jugement” (+4.2M views on YT).

The war broke between Congolese rumba’s bosses! Ferré Gola fired the first shot on June, 9th with his album QQJD. Koffi Olomidé then took turn with Nyataquance on June, 30th. Fally Ipupa concluded the game with Tookos on July, 7th and won it all by stating Congo’s new view record on YT.

Ghana is often at the start of new musical trends, soon to be recycled by the big Nigerian factory that transform any attempt into a worldwide hit – and this system applies to every country: from Ivory Coast’s coupé-décalé to South African house… But Accra still remains one of the major places for dancehall and reggae with Shatta Wale and his “Dancehall King”.

You will also like: “Enku LenU” by Stonebwoy, Ghanian dancehall’s star since the remix of “Pull Up” with Nigerian Patoranking (first released in 2012 and remixed in 2015); “Apae” by Bisa Kdei, another great musical figure of the country.

With “Pana”, Tekno has sung love better than anyone in 2016, yet with nonsensical lyrics: “EhBaby, dibi-daba-diba-dobo / Adaba-dibi-daba-dede-baba” and made up words like “pana” – the romantic feeling he gets when he likes a woman – and “cassava” – a huge plantation or his own penis? Tekno is now considered the next big thing of the naija scene. He’s a Oba (boss) in the making who has planted more of his cassava with “Yawa” so he could reach 18M views on YouTube. They say he’ll be the next one after Wizkid to release a worldwide hit with Canadian rapper Drake.

“Doc Shebeleza” Cassper Nyovest has reigned supreme on his country’s rap game since the release of his album Tsholofelo in 2014. He’s earned six awards – including Best Album of the Year – at the SA Hip Hop Awards 2017 for his third album Tutho.

Floby “the orphans’ father” is the most popular artist of Burkina. In 2016 he celebrated his ten years of career and threw a huge party in Ouagadougou with the other stars of the country. “Baba” is an excerpt from his fifth album and was produced by Shado Chris. The most famous Ivorian singer and arranger of the new generation is the one responsible for the biggest hits of the Kiff No Beat group.

Wizkid is Africa’s most famous contemporanean hitmaker. His duet with Drake, “Come Closer” already went over the 50M views on YouTube. He even won the “Best Artist of the Continent” award at the African Music Awards (AFRIMA, one of the most prestigious ceremonies of the continent, kind of the African Grammies) that took place in Lagos with 700 guest artists.

Dicap La Merveille appeared on the map in July 2017 with the album Tokoos (coming from the Lingala term “kitoko”, meaning “beautiful”). The record is a crossover between pop and rumba, and was proudly announced with the song “Kiname” featuring French rap leader Booba. Thanks to his “Eloko Oyo”, Fally Ipupa can boast about being the only Congolese artist to have reached the 30 million views on YouTube in less than a year.

Launched on YouTube in April 2017 and produced by “the arranger with the sought-after finger” Bebi Philip, “Le Temps” is Kerozen DJ’s biggest hit since “Ca mva dja”. Released in the midst of the ’00s with his former band Boulevard DJ, it became an instant classic hit of coupé-décalé and popularized “the motorbike dance”.

It was released on the same day: “Iskaba” (+8M views on YT) by Nigerian singer Wande Coal is a duet with DJ Tunez, member of Wizkid’s label Starboy Entertainment Wizkid.

Founded by the duo Shayfeen (Shobee and Small X) and awarded North Africa’s Artist of the Year at the AFRIM 2017 with “Wach Kayn Mayder“, the Drari Squad (drari means “kids” in the Derija language, and is a reference to their label Wa Drari Squad) stood out this year thanks to their entourage: rapper Madd, featured on “3310”, “Bingo” and “Allo Ouais”; producer West, signed to French label Néochrome; and Shayfeen who has drawn France’s attention recently. In 2017 they all gathered on rapper Lacrim’s mixtape Ripro 3.

It was released on the same day: “Hasara Roho” by Tanzanian rapper Darassa.

Founded by Fabregras Le Métis Noir – he was part of the Wenge Musica Maison Mère de Werrason too – the Light Music Villa Nova has been Congo’s coolest orchestra since the release of “Mascaras” (+7M views for only one of the several versions uploaded on YT).

It was released on the same day: “Pilon” by Cameroon-based female singer Reniss. “Pilon” is one more story of “the pepper in the sauce”, in the style of rapper and producer Jovi on his New Bell Music label.

The five young wolves of Ivory Coast’s rap scene form the most famous band of the country today. Their scores on YouTube easily compete with those of their elders, the masters of coupé-décalé. The track “Pause” featuring French singer Dadju even passed the 4M views on YouTube. The song was produced by Black K, one of the five members, and Stelair, who is among the young Ivorian producers and singers to follow. “Pause” was the second single of the band since they had signed to Universal Music Africa, an event they celebrated in March 2017 with the release of “Pourquoi Tu Dab ?”.

Konshens and Davido reunite on the explosive “Boom Bang”
News