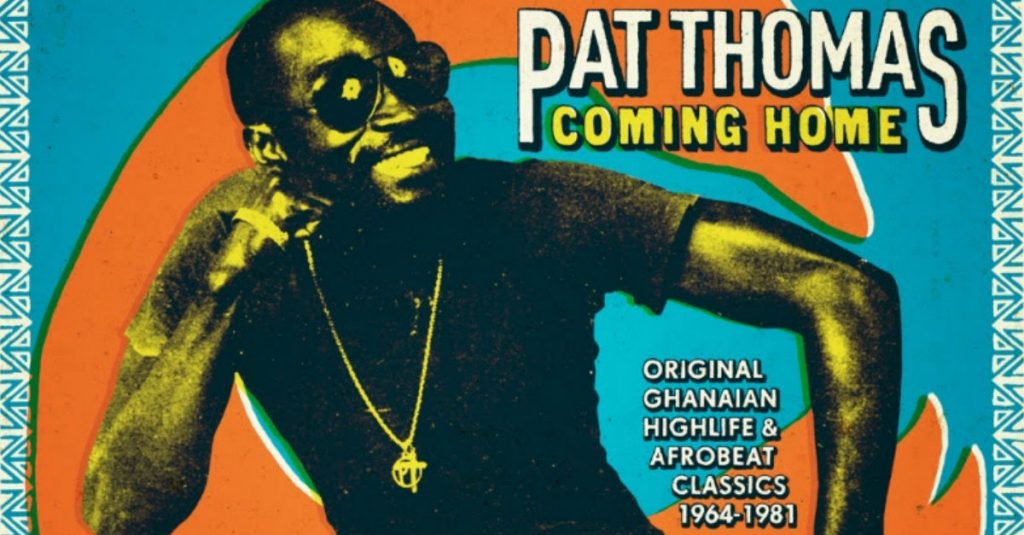 Listen to “Go Modern”, 1st extract from this compilation (Out on sept. 30th) :

“The Golden Voice Of Africa”  is currently on tour with his  Kwashibu Area Band, and this compilation is a chance to get to know Thomas’ singular career.
Initiated by his uncle, King Onyina, major highlife musician,  Pat Thomas  decided to become musician, listening to Joss Aikins (member of Broadway Dance Band signed on Decca record label based in Ghana).

In 1967, Ebo Taylor invites Thomas to join the Broadway Dance Band, a turning point in Ghanaian music history in the 70’s and a fresh air for highlife music.

In 1974 they formed together Sweet Beans, supported by the Cocoa Marketing Board.

« Reggae was hype, Jimmy Cliff was the guy to follow – so I tried to include some reggae and a touch of soul in my music. »

The Sweet Beans band was renammed Marijata. « At this time, I asked George Prah (from Gapophone label) to pay me and he said I had to write a song first. » – that’s how the song ‘Coming Home’ was born, written in the label record office!

After the AFRC came to power in 1979, Thomas left Ghana for Berlin where he kept his highlife musical roots while he opened his mind. He became the first Ghanaian artist to record in Germany !

« In Ghana, expatriates living in Germany were nicknamed ‘hamburgers’, that is why the scene was called ‘burger highlife’. »

Coming out on sept. 30th

Bandé-Gamboa adapted for the dancefloor
News

Feel the trance of Kukaya
News