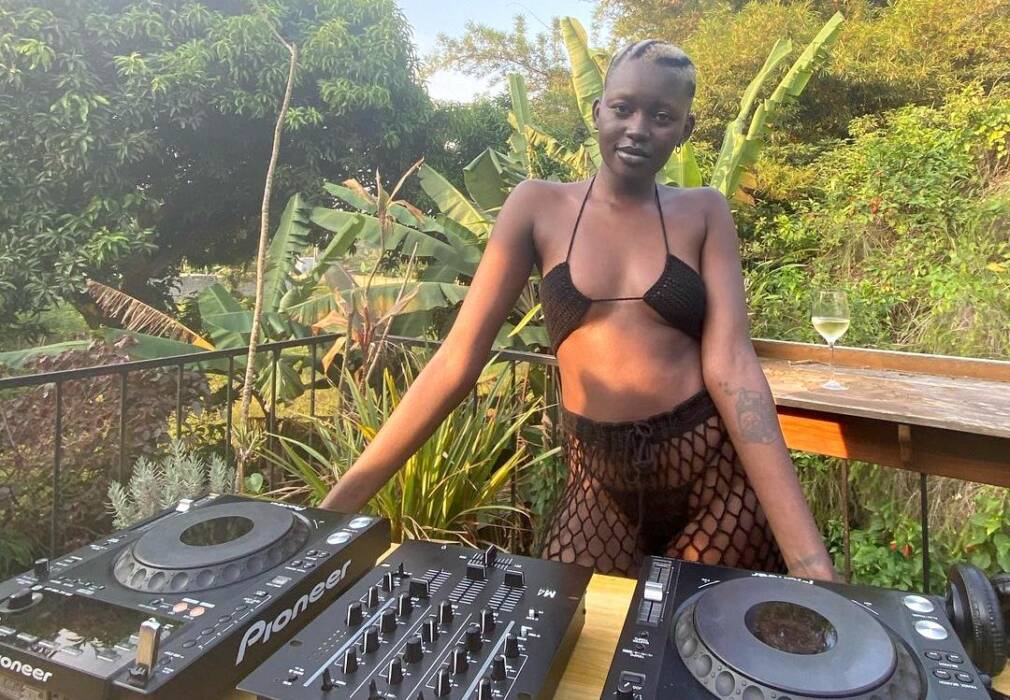 13 mixes for a New Year jam

To help you make your New Year’s Eve a memorable one, we have selected 13 PAM Club sets from our extensive collection. We suggest you (re)listen to these exceptional DJ sets organised from dinner to dawn, to start 2022 on the dancefloor.

During lockdown, PAM started a series to make you dance at home. Initially intended to be ephemeral, PAM Club continues to receive DJs from the four corners of the world, putting the spotlight on the music of Africa and its diaspora at large. Today, we have enough episodes to offer you a non-exhaustive best of, tailored to electrify every moment of your New Year’s Eve festivities. Discover our selection below.

From your oven, embark on the time capsule of the Ostinato records boss, who shares his passion for digging with this mixtape composed of rare (sometimes unidentified) tracks found in Somalia, Chad, Sudan, Djibouti and more. Just like with his reissues, he offers here a new perspective on little-known cultures whose music struggles to travel beyond their borders. “The period covered is from the 1980s to the early 2000s“, Vik explains. “Some of these sounds are key tracks for future Ostinato albums. They are mostly all digitised from national and private archives in the region.”

Get fresh on Montparnasse Musique’s set

While you are looking for the perfect outfit for the evening, give yourself 40 minutes to listen to Montparnasse Musique’s set! In addition to having released an excellent self-titled debut EP this year, it’s worth noting that both artists are also experienced DJs. In the right hand corner, Aero Manyelo, a major figure in South African house music; in the left hand corner, the Franco-Algerian turntablist Nadjib Ben Bella aka DJ BoulaOne, official DJ of the Amazones d’Afrique. Together, they create sparks: congotronic reminiscences, electro-acoustic nuggets, feel-good atmospheres and great dancefloor potential make this mix a must in the PAM Club series!

Welcome your guests with Franck Descollonges

Franck Descollonges is an outstanding selector, an eternal collector and a vinyl bulimic; he is the guy you can trust to welcome people with good music, setting the tone of an evening that promises to be festive. As it is not forbidden to dance when opening the door, the Heavenly Sweetness label boss proposes a selection of biguine and Creole jazz, which he describes as “jazz sounds, close to New Orleans but with purely West Indian rhythms, melodies and songs, which give this style a timeless side“. Brass, drums, good humour and groove!

In the wake of Franck’s mix, we bet on Etienne Tron to launch the party as it should be. While appetizers are put on the table and alcohol starts to flow, and your legs start to twitch. It is the desire to dance taking over you as you listen to this special Ivory Coast 80s mixtape, celebrating 60 years of Ivorian independence at the time of its release. The synths lead the rhythm on these irresistible soukous or coupé-décalé hits from Etienne’s personal collection. Boss of the webradio and the Secousse label, the curator shares his passion for Afro-Caribbean music in the form of playlists, DJ sets and essential reissues.

With her two-hour three-deck set, Dutch DJ Marcelle/Another Nice Mess has enough in store to keep the appetizer – main course – dessert process energized. Renowned for her eclectic and unexpected DJ sets, Marcelle Van Hoof offers us here the kind of mash-up she has the secret for, concentrating on the African-inspired row of her vinyl wall. The Nyege Nyege Festival Lifetime Resident uses her techniques as musical instruments to imagine her own live compositions, which can incorporate Muslim ceremonial music, congotronics, soukous, Afro-jazz, highlife or singeli. No limits!

Hit the dancefloor with Davia

For any fan of batida, baile funk and their offshoots, Davia’s Na Tchada show on Reprezent Radio in London is definitely the place to be. The young Lisbon-born DJ and producer has stepped up his game behind the mic and the decks this year, welcoming the genre’s greatest ambassadors to his show to offer the world the best of Brazilian and Portuguese Afro-electronic music. This true underground grooves enthusiast delivers a vigorous set for PAM, oscillating between 90 and 155bpm, inviting the crowd to put their foot down on the dancefloor for good.

The party is in full swing with King Her

With her Afro-house and Afro-tek rush, Zimbabwean DJ King Her gives us good reason to keep dancing. Marketing, pharmaceutical auditing, multimedia, graphic design, dance, fashion, music… The Sino-Zimbabwean artist has more than one string to her bow, which has earned her the status of mentor for emerging African female DJs, in addition to being involved in various campaigns for health, or against gender based violence. Heady percussion, hypnotic climbs, organic melodies and impeccable transitions, all the ingredients are present in this mix to commune as it should.

Wait until countdown with Catu Diosis

Without leaving any chance for boredom, Ugandan Catu Diosis’ set has all the elements to take us to the countdown of the new year. With her mutant bass music, the Nyege Nyege Festival resident DJ definitely knows the secrets of getting a crowd dancing, tackling both mainstream hits and more experimental sounds in a consistent manner, without any special treatment. A journalist and fashion designer based in Cologne, Germany, she supports female artists from Africa in her own way through her organisation Dope Gal Africa (DGA), which finds and supports the talents of tomorrow. Afro-tech, kuduro, baile funk or Afrotrap are her playground, which she has been sharing since this year with her partner R3ign Drops in the duo Black Sistarz. 10, 9, 8, 7, 6, 5, 4,…

First steps in 2022 with Gafacci

3, 2, 1… Let’s exchange our first wishes on Gafacci’s mix, a hyperactive artist of the global electronic scene! We dare you to name a DJ with an Afro tendency who has never placed the Ghanaian artist’s tracks in his sets… Indissociable from the scene when we talk about his productions, the Accra-based artist is also an excellent DJ. He offers us here a tour of his creations and his influences, with a certain penchant for his local scene and the asokpor style of which he is the ambassador. Influenced by kuduro, Afrobeats, Afro-house or gqom, Gafacci keeps more than ever an underground state of mind, even if he regularly produces big names in contemporary African music. The perfect mix to start 2022. “Shut your mouth I beg eh!“

Bring the party to its climax with Cardozo

Not everyone can keep a crowd on edge. Fortunately, we guarantee you that Cardozo can be trusted with this mission, as he offers us a top-class PAM Club combining speed of execution with impeccable selection. In the space of an hour and 35 tracks, the Limbololo Soundsystem pillar “dribbles between styles and continents“. Jumping without warning from hip-hop to baile funk or from Afro-trap to kuduro, Cardozo distinguishes himself by his ability to rough up his turntables to present us the best Afro-bangers of the moment, favouring incessant changes of rhythm and atmosphere. Involved in the Ivory Coast rap scene since 2020, the French DJ and producer definitely has the fire in him when it comes to making people dance.

Dive into a nocturnal trance with OMAAR

Excited by OMAAR’s album released this year via NAAFI, we asked him if he would like to put on his DJ hat for a PAM Club. What we didn’t know yet was that the Mexican was a real killer on the turntables. The kind of DJ who, besides lining up records in a neat fashion, knows how to tell a story and transport the listener into a trance-like state. With OMAAR at the helm of the locomotive, we invite you to jump on this night train where you will see the electronic landscapes of the London ghettos and Latin America pit stops. A fine example of DJing.

Until dawn with Turkana

When she sent us her set last summer, Turkana told us she was eager to get back to the dancefloors. Her wish was granted as she left at the end of the year to conquer Europe with the Nyege Nyege crew. Although still very young in the business, choosing the South Sudanese DJ and producer is a no-brainer, known for her hybrid and anti-conventional style. She has recently turned the tables on her surroundings in the form of an EP with her friends Nsasi and Authentically Plastic, with whom she forms the queer collective Anti-Mass. Her hard-dance mixtape is therefore tailored to keep the most reckless listeners going until the end of the night!

Come down to earth with Teno Afrika

The advantage of amapiano is that the genre can impose its hypnotic and nonchalant mood at any time. We logically chose Teno Afrika’s mix to close the evening and open the door to a possible after party. At just 21 years old, Teno Afrika is already a key player on the South African amapiano scene, having emerged from the shadows with his essential debut album on Awesome Tapes From Africa. He gave the project an instrumental and underground vision as an antithesis of the genre’s mainstream counterpart, similarly to this refined PAM Club, danceable and restful, allowing us to land gently in the new year…

Listen to PAM Club every saturday on Soundcloud.