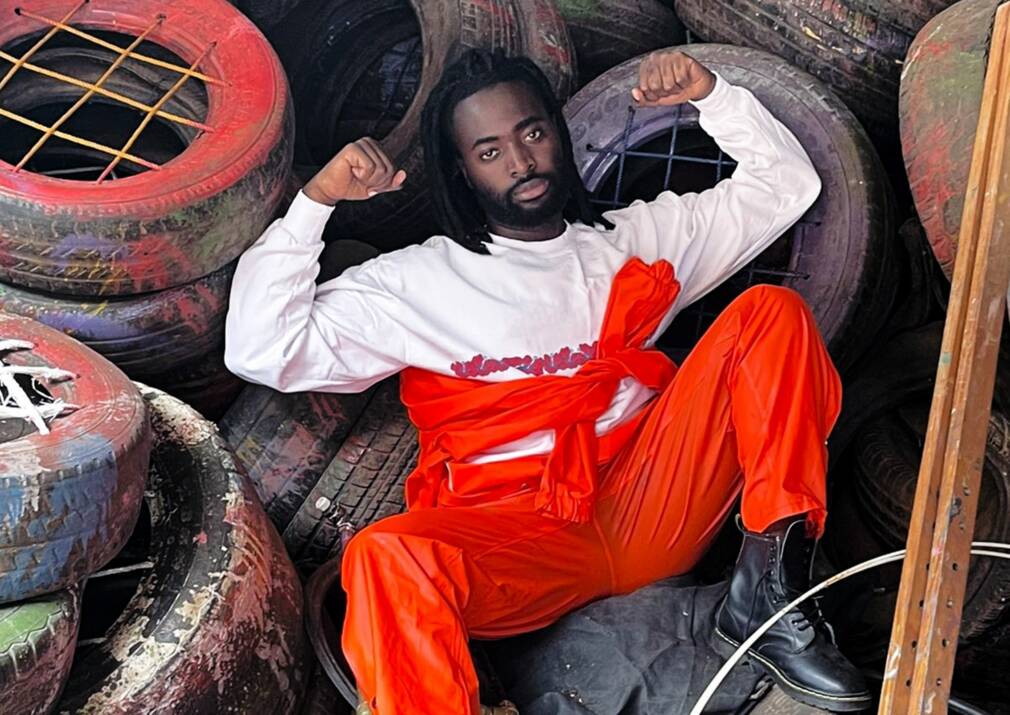 PAM met Chrisman at the Rewire Festival 2022 in the Hague after an explosive show with label partner Ecko Bazz to talk about his musical journey and latest album Makila.

Backstage with the thunderous bump of an afro-tech show happening below, Chrisman decompresses from an epic show, backing up Ecko Bazz, his Nyege Nyege counterpart, for what was a relentless set of bass and war cries. Chrisman, however, is unsettlingly chill. Especially after the headbanging and fierce ad-libbing of his recent set. Soft spoken and outrageously polite, there’s a fine contrast between the genteel figure before me and the experimental tarraxinha and distorted kizomba that blasts from Chrisman’s speakers and records.

A member of the Nyege Nyege crew and its experimental sublabel Hakuna Kulala, Chrisman has been dipping his toe into the waters of music for awhile. He began his music career early on as a member of the hip hop band Young Souljah Empire and as a sound engineer in a recording studio in Goma, Eastern DRC. Though Goma and the people around him weren’t conducive to his creative pursuits.  “In my home in Goma it was really hard to do music because of the family there. They tell you, ‘Don’t do that. It’s not going to work.’” he explains, “I was like, okay, maybe if I go just far from these people, I can be me and do myself, you know?  It’s when you have vision; your feelings that you want to do something.” He concludes, “that’s why I moved to Uganda.”

Chrisman’s story isn’t unlike many of his other comrades within the Nyege Nyege roster. Whether it was the threat of war, being outcast or making their way as refugees, Nyege hosts a full slate of artists and creatives that have moved away from home and now sustain themselves with their creativity. Chrisman linked up with the crew in the early days of the collective when they were still throwing outsider parties at local venues thanks to a friend and MC named Chris Mec who he’d known from Goma. “He used to work with Nyege Nyege and he discovered me and my music and he said, ‘oh, it’s good stuff, you should meet these people.’” Chrisman recounts, “And then I came to Uganda and I stayed with him for some time. He really believed in me.” After his arrival and introduction, Chrisman quickly fit in with the East African electronic Shangri-La. “What attracted me the most about Nyege Nyege was that it was a space where people could express their feelings. It’s musical stuff, you know? It’s a place where they give you tools, materials, where you can practice your music, and that’s an opportunity I never had.”

Since Chrisman has been dabbling with a few genres.  “I produce underground electronics; gqom, afro house, tarraxinha, hiphop, literally everything,” he says with a smile. In 2021 Chrisman released the 6 track EP ​​Ku Mwezi, which operated in an experimental sphere of gqom, trap, tarraxinha and Afrohouse. The intro “Hewa” is a trunk bumping offshoot of gqom that isn’t afraid to wield the synth. The EP was a foundation for Chrisman’s sound, and a production portfolio that has put him behind the likes of Ecko Bazz while on tour around Europe. Now, with the release of his latest album Makila Chrisman dives even deeper into his sound universe. Tracks like “Fatiliya” have a cybernetic flavor and “Haaa-Hooo” could be the soundtrack to a sci-fi horror film. “When I was working on that album, it was really describing all my feelings about music,” Chrisman says in his usual chill. A surprising conclusion for the smiling figure in front of me.

However, it’s perhaps the lead up single “Lupupu” that stands out among the rest. Named after his late grandfather, the title is a tribute to the man who was one of very few to support Chrisman’s artistry. One evening, back in Goma, Chrisman’s grandfather called him over for a chat. The two hadn’t spoken much, but to Chrisman’s surprise he had been observing him. “He told me, ‘“you have a gift from God. You are calm. You’re cool. And you are a hard working guy.’”, Chrisman explains, rather emotionally. “And then he said, ‘keep on believing in what you’re doing. Even if people don’t believe in you, keep on doing it.’” The touching encounter left a mark on the young producer. “I told myself I need to name my favorite track in my album after him so his name can be remembered forever.” Chrisman’s grandfather has since passed away, and the album title, Makila, is named after his late father whom he lost at 4 years old.

“My future, what I want is to make people happy, to make people love my work, give them good music… to see how my music is transforming.”, Chrisman concludes, the clock backstage showing 4:33AM. I asked him and the others if he’s always this laid-back. Chrisman laughs it off, thanking me for the compliment. It was a serious question. Nonetheless it was time to enjoy the bass music happening in the Dutch club just below, more inspiration for the transformative nature of Chrisman’s heavy and hardening sound.

Listen to “Lupupu” in our afro + club playlist.

Makila is out now.