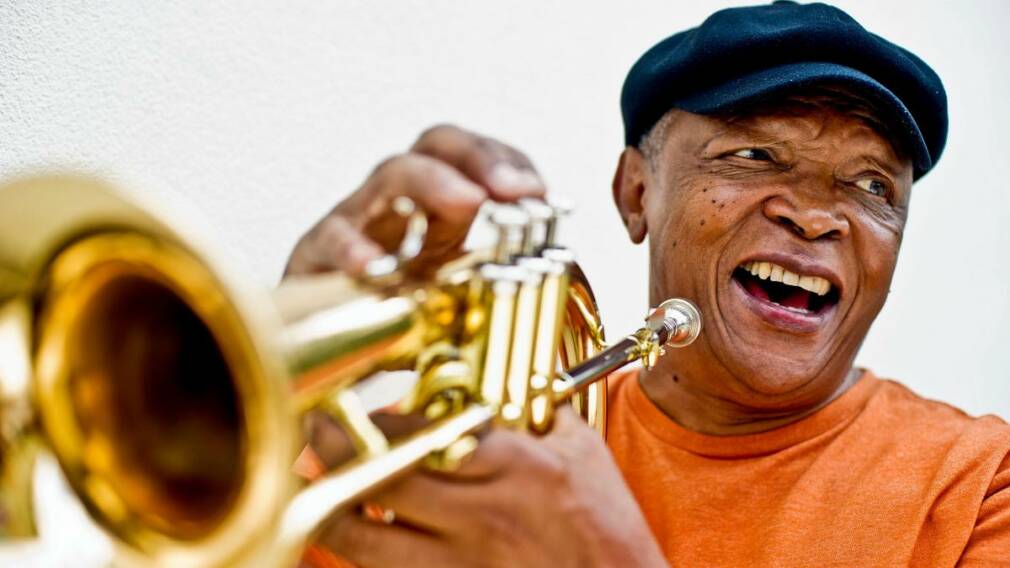 PAM celebrates the 4th anniversary of the musician’s passing by chatting with a young generation of South African artists about his legacy.

It is safe to say that Hugh Masekela is now a music legend. Born in 1939 in Emalahleni, in a racialist country known at the time as the “Union of South Africa”, the man fell in love with trumpet and found inspiration as much in the agony and oppression of apartheid as in light romance and township life. His role in militant music alongside Abdullah Ibrahim, Jonas Gwangwa and Miriam Makeba, his collaborations with top American musicians such as Monk Montgomery and Paul Simon and his pan-Africanists incursions in Lagos with Fela Kuti or in Kinshasa with Stewart Levine all contribute to his legendary status, that keeps on inspiring a young generation of African artists.

Born and raised in Port Elizabeth, Mandisi is a trumpet player. A musician, composer, arranger and producer, his music is rooted in jazz, western classical and African indigenous genres.

I can’t remember my first encounter with Bra Hugh’s music, but I remember the first performance of his that I watched. I must have been 11 or 12, my mother gave me 100 rands to go and watch the gig. It started very late. For the two hours that he played, he had an audience of people who could’ve been so angry at him for being late. But because it was him, the moment he started performing, they were like “okay, it was worth the wait”. I remember how his band was so rehearsed, but even with this great band, you just wanted to watch him.

The moment I could afford a CD player, one of the first CDs I bought was his album, and that was the first time I sat and listened to his music. I had avoided it from a young age, because as I started playing the trumpet, I knew at some point I was going to be compared. I wanted his influence to be as natural as possible, not to be seen as a person who copied him. You can’t, as a South African live music performer, run away from his influence. I remember when Hugh passed on, people wanted me to do tributes, and I said no. You’re asking me to do a tribute because you think I’m going to emulate him. And Bra Hugh would not want someone to emulate him. He would want someone to come in with his own vibe.

He was a book, he was a map. A map of authenticity, of identity. Bra Hugh, playing in a fancy club in America, would be the same Bra Hugh you would see in Moretele Park, or in Cape Town Jazz Fest. He never changed, and he carried South Africa and who he was until his last days.

“Market Place” would be my favourite song from him. It is about storytelling, he tells the story of the girl he meets in the market place so well. [laughs] You are there, you are in that village, he walks with you. It’s so beautiful.

I first discovered Hugh Masekela’s music through my father. He used to play Paul Simon’s Graceland Tour DVD, which has Bra Hugh, Ladysmith Black Mambazo, Miriam Makeba. Later on, I met the man, I collaborated with the man and I got to know him not just as a musician. Bra Hugh was a renaissance man. He was well travelled, well read, and he could chat to you about anything. I first met him at a festival in the Eastern Cape, I was really new at that time and you normally play early. But that night, I ended up being put on stage right after him. When I got off stage he walked up to me and said “I really like what you do. Do you know my friend Oliver Mtukudzi?”, I said “yes, he actually invited me to his concert in Harare”. He said “Great! See you in Harare!”.

I was only putting soul songs or ballads out, and most of my music was quite slow. So he told me: “you need to make people dance”. My song “Jikizinto” actually exists because of the advice from Bra Hugh, also knowing that his music, although making social commentary on what was happening, is also making you dance. And he gave me the formula: “make sure you give your instrument an hour a day, without fail”. That’s something that I’ve tried to practice as consistently as I can.

From him, I learnt to live life proud, loud, and fully African. He was all about us as Africans really being true to our heritage and the way we express ourselves through our music. I went on to read his autobiography, and you get a sense that this is a man who lived out loud. I mean he had a number 1 song… in the 1960s! Bra Hugh was an open book. He would tell you about his gangster days, his musical days… he would tell you about everything, and the legacy is really to live out loud and proud.

I  think “Nomalungelo” (aka “Thanayi”) is my favourite one from him because you really get to understand Bra Hugh’s playful character. He always used to have jokes, and with that song you understand it in his music and in his demeanour.

Langa Mavuso is a singer, songwriter and performer from Johannesburg. His music qualifies as soul and R&B, with strong influences from jazz and South African electronic music.

When I was in high school, I had the incredible opportunity of performing for him while I was at the National School of the Arts. He just said the craziest things, I don’t think there’s anyone who swore as much as Ntate Tshepo and Bra Hugh – they were really fun people.

I think the biggest influence from Hugh Masekela on me has been the style of expression he has in his music. He’s really emotional, and you can feel his heart and spirit in every single note. Songs like “Stimela” makes you hear a narrative, and feel the moving train through the notes played on the trumpet. Even in my own performances, I try to keep the narrative quite clear, and I also try to give it emotion and spirit.

What we can learn from the careers of artists like Hugh Masekela, is that we can always be ourselves boldly. He had such incredible opportunities to be an internationally revered artist, and he still was completely South African, telling the stories of his people. Here we are as Africans and the world ready to give us the platforms: do we assimilate? No. In fact we should rather continue to be bold and to share the stories that we know better than anyone else. And also longevity. When I read Still Grazing I learned about the kind of resilience Bra Hugh had, regardless of the challenges. He remained a professional, prolific musician until he took his last breath.

My favourite Hugh Masekela track has to be “Stimela”. It tells the story of where he comes from, and he tells the stories of many African households that had to lose their bases to the new system that required them to go and work to provide for their families. But also I loved how he performed it. He would make a huge, roaring “tchuu tchuu” sound in the beginning of the song, and it was just electric. And also “Thanayi” featuring Thandiswa Mazwai. I think every Black household plays that song around Christmas time, wedding time…