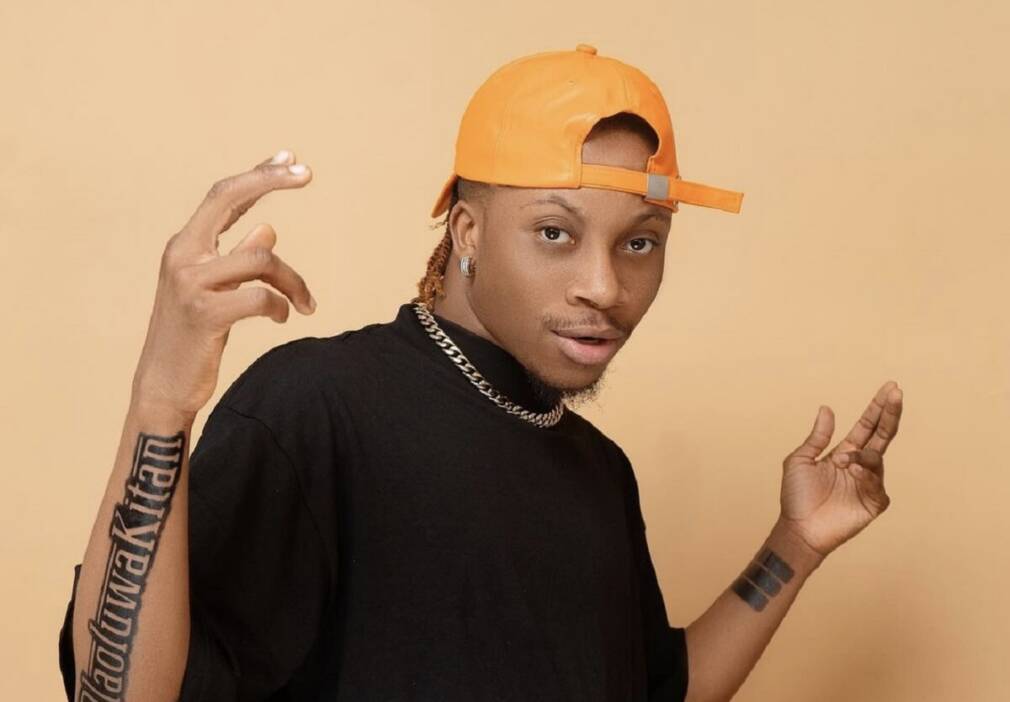 Oxlade on the verge of global acclaim

The Nigerian falsetto singer has taken his signature voice from obscurity to international stardom with a slim string of tracks. PAM interviews the young artist to break down his success.

Oxlade’s ascent from obscurity to serenading about 20,000 people at The 02 Arena within a year is one for the books in Nigerian music. He has since staked his claim as one of the poster boys of contemporary Nigerian pop. The “Away” singer joins a crop of artists like Wizkid, Simi, whose formative years are shaped by experiences from Surulere, a popular community in the heart of Lagos mainland. Oxlade got in the public eye after “Mamiwota”, a collaboration with Blaqbonez, went viral on social media. “I wasn’t active in the music scene when that song dropped; I was working at a cyber cafe because I needed to feed,” he says. That moment leading to a crowd at The 02 Arena chanting his lyrics verbatim would be a game-changer for the singer. “That experience made it possible for me to believe in myself and see a lot of greatness in my potential.”

Born Ikuforiji Olaitan Abdulrahman, the singer started honing his craft at 10 when he became a member of a serenade group in the church choir. This was how he became acquainted with Alpha Ogini, who would later introduce him to Blaqbonez. It didn’t take long before Oxlade, armed with his falsetto vocals and mesmerizing delivery, became the go-to artist for features and hooks by the who’s who of music. Some of these records include “Non-Living Thing” with Ghana’s Sarkodie, “All My Life” with Nigeria’s MI, “Slow Down” with Jamaica’s Skip Marley, “Saralm” with Turkey’s Umut Timur, and more.

In 2020, the singer shared his first ever project, Oxygen, whose release coincided with the dawn of the pandemic. “It was a blessing and curse because I couldn’t promote my music traditionally. I got frustrated and nothing really made sense to me but the beauty of music is that the songs that are destined to pop will pop regardless,” he says. The project is a collection of Afro-ballads that hints on hurt, romance, and dance. It houses fan-favorites such as “Hold On”, “02” and “Away”, which became one of the biggest songs in Nigeria that year. In 2021, he raised the stakes with a near-surprise project dubbed Eclipse which spawned the viral “Ojuju”.  According to the singer who cites Wande Coal as his biggest influence, “having gone through the gallops and potholes in the journey of life, it was important for me to sing about my pain, position, mental health, and perception of love at the time”.

The donkeywork of navigating the music industry as an independent artist since his debut would culminate in his recent signing to Epic and Columbia Records, both subsidiaries of Sony Music and in this piece, he speaks to PAM ahead of the new phase of his career that is about to be unlocked.

Tell me about Olaitan before he became Oxlade

Olaitan started from the church and has been doing music all his life. He grew up with his grandma after losing his mom at three. It was tough getting to this point because my family was against me being a musician, so I had to leave home and the rest is history. I’m happy to have prioritized my happiness and made the decision to please myself first before anybody. That’s why I am here today.

At the point “Mamiwota” dropped, I wasn’t active in the music scene. I was working at a cyber cafe because I needed to feed. Music has a purpose for me, music called me back and that’s why it’s working out for me right now. Music has proven itself to me time after time. For instance, I performed at the O2 Arena alongside Wizkid in 2019, before I even had my own hit song. A lot of people will lobby for such an opportunity but in my case, it was a request from the artist directly. Moments like that made it possible for me to believe in myself and see a lot of greatness in my potential. I’ll never forget it.

That’s phenomenal. You mentioned that when “Mamiwota” dropped, you weren’t exactly an artist.

Yes. I had to quit music to go find my daily bread. It was hard being in the street after I left my family because I didn’t want to go back to school. Music gave me life, success, confidence, identity, and everything else.

Fantastic. How did you get pally with Blaqbonez?

I was in an Acapella group that serenaded people. One of the group heads took us to [producer] Alpha Ogini, who was working with Blaqbonez at the time, to record. After our session, I’ll wait behind and beg him for beats but he was skeptical because I haven’t done anything Afrobeats prior. Eventually, he budged and we did a song that Blaqbonez heard and reached out to me about. He said we had to work and that’s how “Mamiwota” came about. It was a big deal to me – and still is – because I’ve been a big fan of Blaqbonez. He was one of the biggest rappers at Obafemi Awolowo University (OAU) and people always talked about how good he was on Facebook and 2go communities. I watch his rap Cypher as a fan, so working with him is a dream come true and I’m happy that we can have an impact on our careers differently.

You also go way back with Fireboy, from “Sing” in 2018. How did the connection happen?

I met Fireboy at one of my producer-friend’s studio. He was gentle, so we didn’t talk or connect that much. Later, I was speaking with Zamorra and asked him who his favorite artists were. He mentioned Kizz Daniel, Davido, and Fireboy. I wondered who Fireboy was and why he was mentioned. He said, “Fireboy is not really out there but he’s one of the greatest to ever do it, and one of the best songwriters I’ve ever met”. That piqued my interest in Fireboy, so when we met and after he heard my sound too, we had mutual respect for each other and started connecting. We discovered many similarities with each other and everything just made sense before “Sing” happened.

There’s something unique about your vocals. You should know by now…

I’ve always known [laughs]. I didn’t just know that I was going to get to the next level of my life where it’s like a means of livelihood. Although, I’ve not always been confident because I’d not started seeing the numbers, streams, love, or a fan base.

You’ve become one of those artists on everyone’s lips even without having to drop your own song. Was it intentional cracking that sweet spot?

I had nobody, no godfather, label, or structure when I came into the music industry. So, I tried to do strategic collaborations that will benefit me and the artist mutually. “Mamiwota” gave me the inspiration to do more strategic collaborations and since then, I’ve been able to make a significant contribution to Africa’s rap scene. There’s “Kolo” with Ice Prince, “Non-Living Thing” with Sarkodie, “All My Life” with MI, “African Girl Bad” with Zoro, etc. These collaborations were intentional because they added value to both parties and it was great doing business with every one of them.

“Ojuju” spawned some thrilling moments on social media last year. What were you aiming at with that record?

Then, the industry was inundated with amapiano, so I was going for a statement. That was audacious because my team wasn’t entirely sure of it but I stood my ground and I’m happy it paid off. I will never second-guess myself again. “Ojuju” made people more confident about dropping slow and mellow songs. I tried to explore another phase of Oxlade that nobody had seen because he’s always about love and other things but insecurity and toxicity are something people rarely sing about, despite knowing love is not always sweet. There’s always a downside to it, and I’m lucky enough to be the one to address it.

How important is being open to you as a person and artist?

I’m not good with words, so when words fail me, the best I can do is sing because it’s easier for me to communicate when I’m singing. I paint a picture with my music, like you’re in the middle of a series and experiencing different flavors of melodies as the message hits home. My music talks a lot about myself and that’s why I think people connect to me on a different level.

You dropped Oxygen at a very uncertain time in the world but “Away” still emerged as one of the biggest songs in 2020. There must’ve been some take away from that, right?

It was a blessing and curse because I couldn’t promote my music traditionally. I got frustrated and nothing really made sense to me but the beauty of music is that the songs that are destined to pop will pop regardless. At first, it felt like I didn’t get a chance to be celebrated because the songs were doing well globally but I couldn’t perform at any show. Everywhere was shut down but on the positive side, many also dropped music and we’re all met with a similar fate. I’m not sure how the project ended up successful but all I know is that I gave the world my best and they accepted without question.

Then you followed up with Eclipse, a surprise drop

I don’t fancy too much anticipation before dropping a record. I just put out music because I feel anticipation kills the authenticity and quality of the song. When people are not expecting something when you give it to them, they’re left with no choice. I think that’s my formula and it’s since worked for me.

There’s something otherworldly about the aesthetics of both projects. I presume that’s not a coincidence

The two projects depict two phases of my life. Oxygen was a pure, unbroken, unshattered Oxlade who was doing music just for the love of it. That’s why records like “Hold On”, “O2” show my vulnerable side, while “Away” portrays me as a loverboy but Eclipse is a mixture of the light and dark phases of Oxlade. It’s like I’d gone through the gallops and potholes in the journey of life. It was important for me to sing about my pain, position, mental health, and perception of love at the time.

Having grown in leaps and now armed with the expertise of a music conglomerate, how will you describe the Oxlade brand moving forward?

Oxlade is on the verge of international dominance. I and the team at Epic, Columbia, and Sony are optimistic about the plans in store. Also, this is my album year, after years of recording. I feel like the world hasn’t heard half of what Oxlade has to offer and due to back and forth, I’ve not been as effective when it comes to releasing music the way that I’m meant to. This time around, I’m trying to be selfish about my catalog.