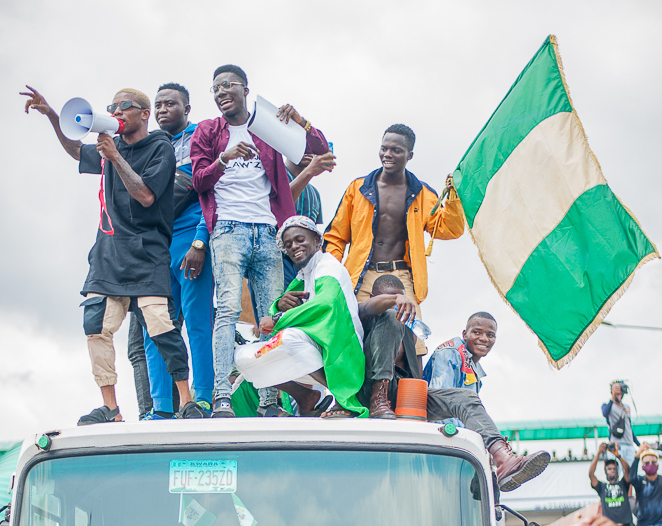 The latest on Nigeria’s EndSARS movement

The most recent update on the status and development of EndSARS and the pursuit of police reformation in Nigeria.

Last Wednesday marks one year since the Lekki Massacre when Nigerian army officers opened fire on a group of peaceful EndSARS protesters on the Lekki Toll bridge. An estimated 15 victims were killed in the massacre with several more injured. In the aftermath of the shootings the government tried to deny responsibility, labeling any information on the Lekki Massacre fake news, until the Lagos state governor admitted to the shootings several days later.

Abuja, Kano, Ibadan, Port Harcourt, and other cities have organised demonstrations and candle light vigils to honor the memory of the lost, and continue to push an uphill battle for police reform.

While the government was pressured to announce sweeping reforms, including the disbandment of the SARS (Special Anti Robbery Squad) task force, who sparked the protests after video surfaced of SARS members shooting young man in front of a hotel in Ughelli, Delta State, fleeing with his car and leaving him to die, there has been no conclusive evidence to point to total disbandment. Nor have any officers or security personnel been charged in relation to the Lekki Massacre.

This leaves many asking themselves what has changed since Nigeria, and other cities around the world, erupted in protest against corruption and police violence. Some are also quick to notice the regression to Nigerians’ freedom of protest and assembly as the government banned Twitter last June, a major tool for Nigerian youth organising demonstrations, lobbying for political (and economic) capital, and a platform for high profile condemnations from some of Nigeria’s top music artists. While some may have hoped President Buhari would push through a reform before the end of his tenure, recent signes show a lack of political will to make any foundational changes.

One takeaway from the protests and massacre was Nigeria’s outsized youth population’s willingness to engage in protest and reform, including a slate of Nigeria’s top artists who gave a platform to those speaking out. Nigerian protest songs became a staple for demonstrations, including Fela Kuti’s “Sorrow, Tears & Blood” or more direct responses to the modern police corruption including Falz’s rendition of “This is Nigeria”  and Burna Boy’s “The Monsters You Made”.

Pan African Music sends its sincere condolences to the victims of police violence in Nigeria, including those killed in the Lekki Massacre, and stands by those demonstrating for a more just society.

Protests sparked across Nigeria after video footage of the SARS police force pulled two men out of a hotel and onto the street in Lagos, shooting one of them. The act was one among a long series of brutality complaints against the federal police group. Amnesty International has documented more than 82 cases of torture, ill-treatment and extrajudicial execution between January 2017 and May this year, alone. The SARS unit has since been disbanded following a presidential order from Muhammadu Buhari, however no arrests have been made nor serious reforms proposed.

Protests continue and demonstrators are met with violence as tensions between police and the public continue to rise. Nigerian is one of Africa’s youngest nations, over 60% of the population is under 24, and these youth have felt specifically targeted. Years of shakedowns, beatings, and harassment have created a stark generational divide between the police and the policed. The government announced the disbandment of SARS on 5 other occasions, after which no serious reforms took place. The current iteration of protests are seeking broader, more substantial reform.

Popular artists, often victims of harassment themselves before earning fame, have taken a vocal stance against in the EndSARS campaign and the Nigerian government’s lack of response. These artists are using their social media outlets to spread information about the realities on the ground, educate people on how they can support the cause, and offer a critical perspective on events as they unfold.

Below is the most recent update on the status and development of EndSARS and the pursuit of police reformation in Nigeria :

Constructive meetings with @NigeriaGov Foreign Minister @GeoffreyOnyeama, Vice Pres. @ProfOsinbajo, & local leaders in #Abuja. Counselor Brechbühl, @DRL_AS Destro, and I conveyed the US commitment to work together to mitigate violence and improve #civiliansecurity in #Nigeria. pic.twitter.com/k7Y4VMrbm5

If you are filing a petition to any of the SARS judicial panels set up nationwide & need a lawyer to help you prepare your petition/represent you on the day of the hearing, please fill this form & we will try our best to get you one for free.https://t.co/hAuxV5xpW2

The independent judicial panel members investigating the violence perpetrated by the SARS group and other police are forced to sign an oath of secrecy. The panel is not open to the public.

Well done to the youths in Lagos for coming together to select Rinu Oduala & Majekodunmi Temitope to join the Lagos Judicial Panel On SARS as part of our commitment to justice and compensation for victims of Police brutality. Proceedings are public, follow @LagosSarsPanel pic.twitter.com/9cNTWgaZGq

The governor of Lagos state Babajide Sanwo-Olu tells @BeckyCNN who ordered peaceful protesters to be shot. He says he believes there will be ‘genuine reforms’ of police following #EndSARS protests pic.twitter.com/Ww9wZi7Mio

Memorials are risen to honor victims of Lekki Toll Gate massacre on one week anniversary.

Confusion mounts as separate acts of civil disrest manifest in the looting of misappropriated COVID-19 relief supplies. Though the looting, which has resulted in 4 deaths and 400 arrests so far, is not directly related to the EndSARS protests, it is under the broadly related issue of governmental mismanagement.

A politician, whose house was raided in Lagos state, said he was planning to share the Covid-19 aid on his birthday.https://t.co/Dd6lKjr8xw

A judicial panel is set to convene today to investigate abuses from former SARS members, a step which seems to restore a momentary calm in major cities.

Pope Francis calls for prayers to avoid violence in Nigeria.

Let us pray to the Lord for Nigeria, so that every form of violence might always be avoided, in the constant search of social harmony through the promotion of justice and the common good.

Lagos State Governor, Babajide Sanwo-Olu, released a schedule of some cases to be heard in the criminal prosecution of police officers via his official Twitter handle.

Today seems like a good day to get on to the work of rebuilding Lagos and ending police brutality.

To show our commitment to the latter, here is a list of ongoing prosecution of police officers for offences related to the violation of human rights in Lagos. pic.twitter.com/dbXdBL0WYZ

Burna Boy makes an appearance on SkyNews and announces “This is the most important moment in Nigeria’s history.”

“This is the most important moment in Nigeria’s history.”@burnaboy says the “youth have come together” and decided “enough is enough” to protest against police brutality in Nigeria.

Gov. Gboyega Oyetola of Osun on Friday announced the suspension of the 24-hour curfew imposed on the state to tackle the rising violence and damages.

President Buhari calls for peace and attempts to reassure Nigerians on the state of progress but failed to address the tragedy in his series of Tweets posted October 22nd.

This government respects and will continue to respect all the democratic rights and civil liberties of the people, but it will not allow anybody or groups to disrupt the peace of our nation.

Instagram falsely flags the hashtag EndSARS as false information. They have since corrected and posts using the hashtag are now visible.

The Feminist Coalition urges protesters to respect the newly imposed curfews and announces it will stop receiving donations. The group previously had its bank accounts frozen and was forced to turn to cryptocurrencies for raising funds. The group also breaks down how donations previously received (roughly $400,000) will be distributed.

A statement from The Feminist Coalition. October 22nd, 2020. pic.twitter.com/MG6deijfdG

Seun Kuti curses leading Nigerian parties, claiming youth will vote out leaders in 2023 for their inaction.

Tiwa Savage condemns Beyoncé’s lack of support especially after her extensive Nigerian collaborations on the Black is King album. Tina Knowles, Beyoné’s mother, shot back at Tiwa Savage for her remarks. A discussion ensues about the role of international artists in speaking out, and the impact of artist voices in general.

Afrobeats singer, Runtown, claims to have received death threats on the part of government officials.

No matter how many death threats you send my way, you can never silence me. Our cause is just!

The UN calls for “maximum restraint” from Nigerian government after violent interactions with Nigerian state security forces. The UN Secretary-General, António Guterres,l also called for an end to reported police brutality and abuses.

Soldiers opened fire into a crowd of peaceful protesters at the Lekki toll gate in Lagos on Tuesday. The state government claims that there were 25 wounded and 1 dead, Amnesty International reported 12 people died including 10 at the Lekki confrontation.

WizKid and other artists delay album releases to continue focus on EndSARS movement.

How to help : If you are in the US, find an upcoming demonstration here.

Continue to fund Amnesty International providing essential on the ground information and support.