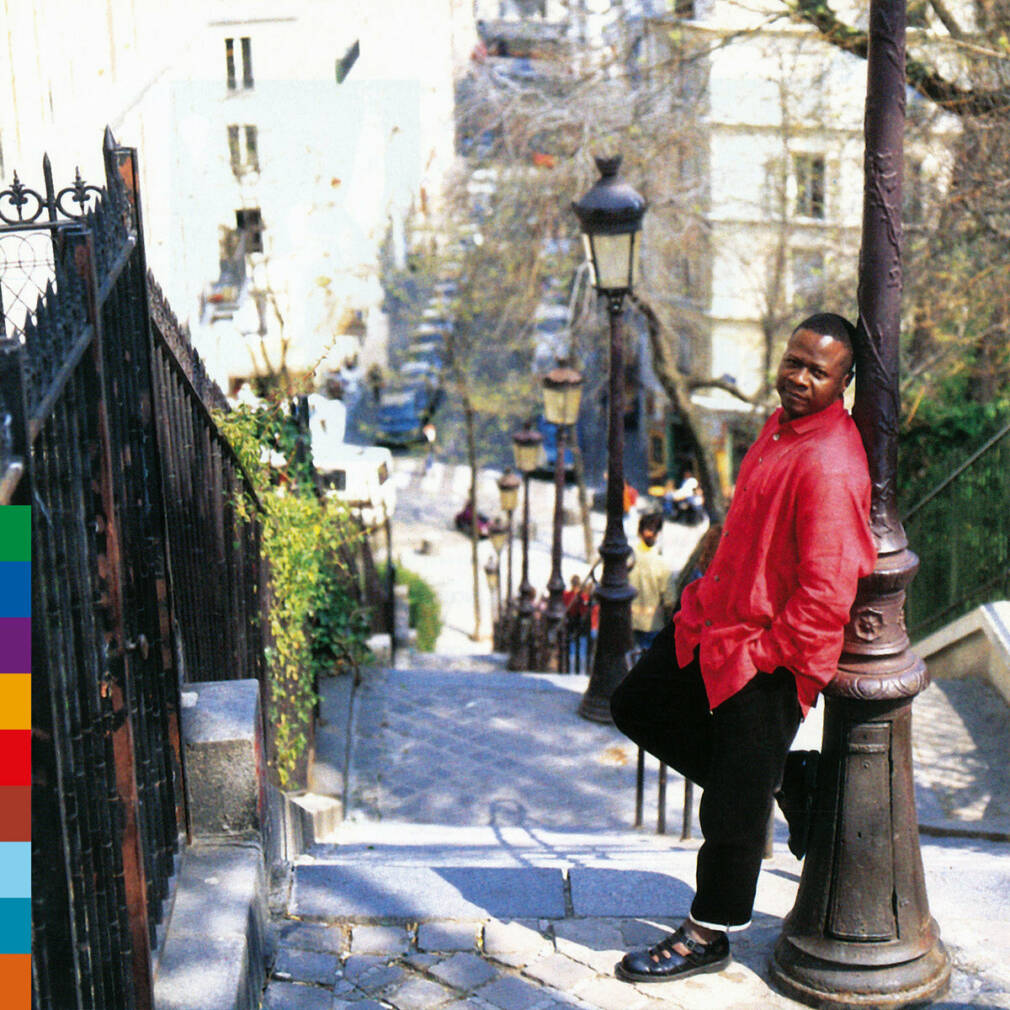 For the third and final in our series on classic albums recorded in Paris in the eighties and nineties during the first coming of “world music” we consider Le Voyageur by Papa Wemba.

A portrait of Papa Wemba posing on a Parisian staircase provides the cover for Le Voyageur released on Peter Gabriel’s Real World label on 12th April 1992. The record that would announce Papa Wemba’s arrival on the international scene and back home in Zaire put an end to rumours that Wemba had died (which had been circulating as a result of his long term residency in Europe) Le Voyageur stands as a canonical record of the epoch.

Born in 1949 a decade before Congo won back its independence, Wemba’s mother was a pleureuse, (a professional mourner) and it was this melancholic vocal style that provided some of the earliest and most lasting musical inspiration for the young Jules. Coming of age in the so-called belle époque of artistic and cultural renaissance that accompanied independence, Wemba moved to Kinshasa in the sixties a story mirrored in the semi autobiographical 1987 film La Vie Est Belle (a sort of Congolese The harder they come) and began his musical training proper with elders Tabu Ley Seigneur Rochereau and Jean Bosco Mwenda.

Forming his first band Zaiko Langa Langa in 1969 Wemba would be a founding member of Isifi Lokole and then Yoka Lokole before forming Viva La Musica in 1979 within the musicians’ fiefdom of Molokai where he received his venerable nickname of “Papa.”

At the forefront of what was the third generation of rumba musicians, Wemba then took a six year sabbatical in 1979 to join Rochereau’s group Afrisa International in Paris before curating a second lineup of Viva La Musica based in France and a loose collection of session players whom would make up the personnel on Le Voyageur.

Astute and ambitious, Wemba would eventually maintain separate bands in Europe and Congo, and Le Voyageur was thus conceived as a smoother and more polished record marketable to Europe.

Opening with the salsa vibes of “Maria Valencia” a montuno or ostinato keyboard vamp sets up a groove before Wemba enters with a plaintive vocal that is answered by a humid Trumpet solo. If this first tune left anyone unsure of Wemba’s star quality, then the accompanying music video (remember this was the heyday of MTV) presented Papa Wemba to the public in all his dapper regality.

Here we must note that by this point Wemba was celebrated at home as the king of the sapeurs and the video for “Maria Valencia” shows Wemba dancing in multiple outfits each sharper than the last. Le Voyageur thus documents the synergy of fashion and music that would define this costumier in chief of the subculture of dandys know as Sapeurs (Société des Ambianceurs et des Personnes Élégantes or Society of Ambiance-Makers and Elegant People) who uplift the streets of Kinshasa and Brazzaville with their performance art.

For Wemba, dressing elegantly came above all as he once explained: “When I say well groomed, well shaved, well perfumed, it’s a characteristic that I am insisting on among the young.”

Le Voyageur thus sought to out-swag the Parisians but with added sunshine as on “Lingo Lingo” which adds sunny soukous guitar lines to the party before the title track “Le Voyageur” for which we switch from electric to acoustic guitar.

On “Jamais Kolonga” the band falls away for an acapella folkloric arrangement showcasing Wemba’s voice accompanied by percussion from a clay pot and hand claps with just a few embellishments from a lone soprano sax. Introducing listeners to another side of Wemba “Jamais Kolonga” demonstrates how the sound Wemba had crafted was of course indebted to rumba, but also to the folkloric music promoted via President Mobutu Sese Seko during his policy of Zairianization – the authenticity policy promoted during Wemba’s youth (the expo of which was the 1974 Ali / Foreman bout known as “The rumble in the jungle.”)

The mood then changes to the minor key for “Matinda” a searing example of pure “rumba rock” on which the synths and gated snare (a studio technique of abruptly cutting short a reverb) situate us very much in the 80s/90s. With its reggae chops, keyboard wizardry and soukous guitar “Matinda” exemplifies an idea of fusion that was being newly marketed as “world music.”

In concession for commercial appeal the tunes on Le Voyageur are arranged shorter than they might have been performed back home in Kinshasa and indeed the album would receive significant radio play. Nonetheless on “Yoko” we get a glorious seben (an extended guitar outro) showing that as a bandleader Wemba always graciously made space for the musicians in his typically big bands to shine.

The sun sets on the albumwith the anthemic “Zero”  which sees Wemba joined by a female choir for a big showy finish. A showman to the end, Papa Wemba would pass away of a heart attack on stage in Abidjan in 2016 ending a journey that started for many Western listeners with Le Voyageur.

Le Voyageur then is a classic and like Immigrés and Soro which we considered previously stands not only as a cornerstone of Wemba’s oeuvre but also an important album in the sometimes reductive story of world music – the marketing phenomenon described by Talking Heads’ David Byrne in his famous New York Times open-ed “Why I hate World Music” as; “a none too subtle way of reasserting the hegemony of Western pop culture” by ghettoising together all the “foreign” music.

So whilst some of the production on Le Voyageur has dated, along with how the record might be catalogued, Papa Wemba’s voice has only become more emotive now we have lost him. Le Voyageur is part of his legacy and this joyful record like those of his peers Youssou N’dour and Salif Keita defines a second Parisian Fin de siècle.