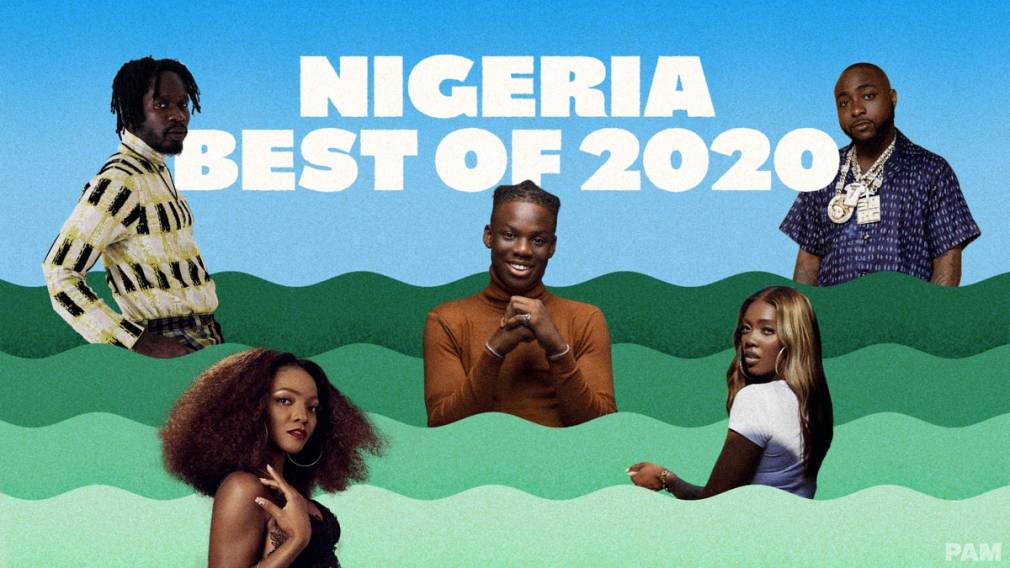 Our Nigeria-based journalist Joel Praise has selected his favourite Nigerian tracks of the year.

Ahead of his sophomore album, DJ Neptune enlists Mr Eazi and Joeboy to deliver Nobody. The serenade tells a tale of being awed by the endowment of one’s lover with a desire that they take interest in nobody else. The record soared gradually, and has  now become one of the most streamed Nigerian songs released this year. According to Radiomonitor, Nobody is so far the most played song on Nigerian radio in 2020. It was also the 6th most Shazamed song by Nigerians this year. Cementing its reign, Nobody has been nominated for Song of the Year at the forthcoming Headies, Nigeria’s biggest music award.

New kid on the block, Omah Lay staked his claim with Bad Influence released earlier in the year. The self-produced record which hints at the effect of experiencing a toxic love interest has been championed with popular lines like “‘Cause the doctor said I burnt my liver. I’ve been drinking, smoking cigars”. Bad Influence which unwaveringly maintained its position at the zenith of Nigeria’s streaming Charts amidst releases from heavyweights has been confirmed the most streamed and searched song in Nigeria on Apple Music and Shazam respectively. Omah Lay is a worthy contender for the highly coveted Next Rated Awards at the Headies.

FEM meaning Shut Up is the opening single off the singer’s album, “A Better Time” which features Tiwa Savage, Nicki Minaj, Lil Baby, Bella Schmurda, Sho Madjozi, Nas etc. Following a cancelled tour, months-long social media hiatus, Davido unleashed the record originally themed to hush naysayers but went ahead to becoming one of the most relevant songs during the #EndSARS protest, one of the biggest movements in modern Nigerian history. FEM became the first Nigerian music video to hit over a million views in 7 hours on Youtube, breaking the singer’s previous record for Blow My Mind featuring Chris Brown which garnered a million views in 10 hours.

Off his release streak as Apple Music’s ‘Up Next’ Artist in June, Rema struck gold with Woman. The boisterous record recounts the singer’s immense admiration for the opposite sex. The song immediately shot atop the Official UK Afrobeats Charts, accompanied with visuals that celebrates women of different facets. Woman further cements the singer’s stake as one of the fastest growing artists in history of Nigerian music, having clinched nominations at BET, MOBO, MTV EMA a year after signing to Mavin Records.

In the Pheelz-produced record, Patoranking pens and belts an ode to the hood, particularly Ebute Metta, a rural part of Lagos where the singer spent his formative years before fame. Abule became a street favourite right off the bat, as it portrays the typicality of happenings therein. Though released a few months ago, it has become one of the most played records on Nigeria’s airwaves. The hyper-spirited Afro-dancehall record is housed under Patoranking’s third studio album, “Three” which features Tiwa Savage, Flavour, Sauti Sol etc.

Mayorkun kicked off the year with a whimsical record that sparked cultural impact amongst rappers, inclining them to create their own rendition. The record which calls for squad celebration and solidarity also became a social media sensation as users added “geng” to relative posts. Mayorkun released an EP of remixes of the record, collaborating with artists from Nigeria, Africa and the UK. Geng did set the tone for what will be Mayorkun’s best year yet, as he contends for Artist of the Year alongside heavyweights like Davido, Wizkid, Tiwa Savage, Burna Boy at the Headies.

The singer pens a love letter to her unborn child with Duduke which became a sensation amongst expectant parents during the COVID-induced lockdown and beyond. In a year where the expected could be otherwise, Simi delivered the biggest song of her career yet by sharing the emotions that millions of people in the world experience. The record remains one of the hottest songs in Nigeria this year and has been nominated for Song of the Year at the Headies Award. In the most melodious way, Simi passed on the true understanding of loving someone you haven’t seen yet. The record emerged one of the most streamed songs on Apple Music in Nigeria in 2020.

Mavin Records’ Ladipoe tapped Simi for what became Poe’s most successful record yet. The record came after a chain of freestyles built around his Revival Sunday run on social media. Bearing elements of intimacy, seduction, sensuality, Know You became of the anthems that indulged Nigerians during lockdown, inspiring a slew of challenges on Tiktok, Triller etc. With the record, Poe lands his #1 debut on Apple Music across countries like Nigeria, Kenya, Ghana, Uganda etc. In a June report, Know You emerged the most used Nigerian song on Tiktok with 45m global views of videos created on the platform. The record is a huge contender for Best Collaboration at the 2020 Headies.

Olakira – “In My Maserati”

This record is a byproduct of his love for the luxury vehicle brand and has amassed millions of streams across streaming platforms. The self-produced record features a guest appearance from Davido, furthering its reign. The record has earned the singer a nomination for Rookie of the Year at the Headies.

Housed in his debut project “Oxygen”, Oxlade delivers what would be his most successful single yet with Away. The fast-rising singer croons about going places away from whatever distraction with his significant other. The song which recently caught Drake’s attention cements Oxlade as one of the new generation talents out of Nigeria. The singer has been nominated for the highly coveted Next Rated at the Headies.

Falz opened the year teaming with the UK rapper who is of Nigerian and Ugandan descent. The Afro-swing number which took off slowly mushroomed during lockdown, after the singer soundtracked it for his own #DontRushChallenge rather than using the signature record by Young T & Bugsey. Bop Daddy became the go-to song for most Nigerians who hopped on the challenge across social media.

Koroba is the second single off Savage’s third studio album, “Celia” which features Davido, Sam Smith, Stefflon Don etc. Here, the singer delves into a deeper realm, challenging socio-political ills rife among Nigerians. Some of what has boosted Nigerians’ affinition to the record is its opening line, “I no come this life to suffer” connotes “my mission to earth is not to suffer”. The record which has topped charts across digital and airwaves has tipped Savage as a nominee for the revered African Artist of the Year title at MOBO, MTV Africa Music Awards, making her the only female artist in these categories.

DMW maestros team up to deliver the catchy mid-tempo Afro-fusion number laced with word-plays and infectious jargon. The record also speaks to unrequited emotions from a love interest who’s more concerned with materialism. The record furthers Mayorkun’s run as one of the hottest artists in 2020.

Barawo is a socio-political commentary that hints on the diminishing state of the country. The music duo tackle issues of jungle justice, extrajudicial killing, police brutality in Nigeria. The record became a national smash for its sonic and thematic resonance and went on to be an important soundtrack to protesters during the #EndSARS movement. Its remix which features Davido was released in the thick of the protest.

In the record eponymous to the King of Pop, Timz swerves from romance to deliver a record layered with emotion, braggadocio, jolly vibes for hot steppers. MJ was followed by a couple of remixes from Teni, Mayorkun etc. The record became one of the early hits of 2020 and has maintained enough momentum to land Timz a Rookie of the Year nomination at the Headies, also following his delivery on Loading, one of the standout records on Olamide’s recent project, “Carpe Diem”.

Jamopyper feat Mayorkun – “If No Be You”

The record found its way to popping online before its official release due to popular demand. Signed to the Zlatan-led Zanku Records, Jamopyper teamed up with Mayorkun for the street record now one of the biggest songs in Nigeria in 2020 and one of the most played on radio in Nigeria. The record teases yearnings to spend quality time and experience with one’s significant other. The singer has been nominated as Rookie of the Year at the Headies.

Released under the Phyno-led Penthauze Records, the trap-leaning emo record oscillates between shoving bad energy, naysayers and calling on ‘congratulations’ as the only worthy conversation. Having buzzed for months now, the Tempoe-produced number has placed Cheque as one of the Nigerian artists to watch in the coming year. According to Radiomonitor, Zoom is one of the most played songs on Nigerian airwaves in 2020.

Having bubbled under for a minute, the fast-rising singer lands his most successful song yet. Though controversial, as glorification of the internet fraud culture is embedded in its theme, Cash App has been one of the most sought-after Nigerian songs for a while. Initially released in August, as the song hit mainstream consciousness following Schmurda’s appearance on Triumphant, off Olamide’s “Carpe Diem”, it was then re-released with Zlatan and Lincoln as featured artists. The record references the ease of money transfer using Cash App, a mobile payment service developed by Square. Schmurda has been nominated for Next Rated at the Headies, contending with Omah Lay, Tems, Oxlade.

Gold further veers from his Alternative signature to deliver a blend of Highlife and Afropop. Something Different tells a story of unrequited love including pursuit for materialism by his love interest. Here, Gold furthers a statement about his rebrand which he sealed with the release of his latest project, “Afro Pop, Vol 1”. The record spent weeks on the Official UK Afrobeats Chart.