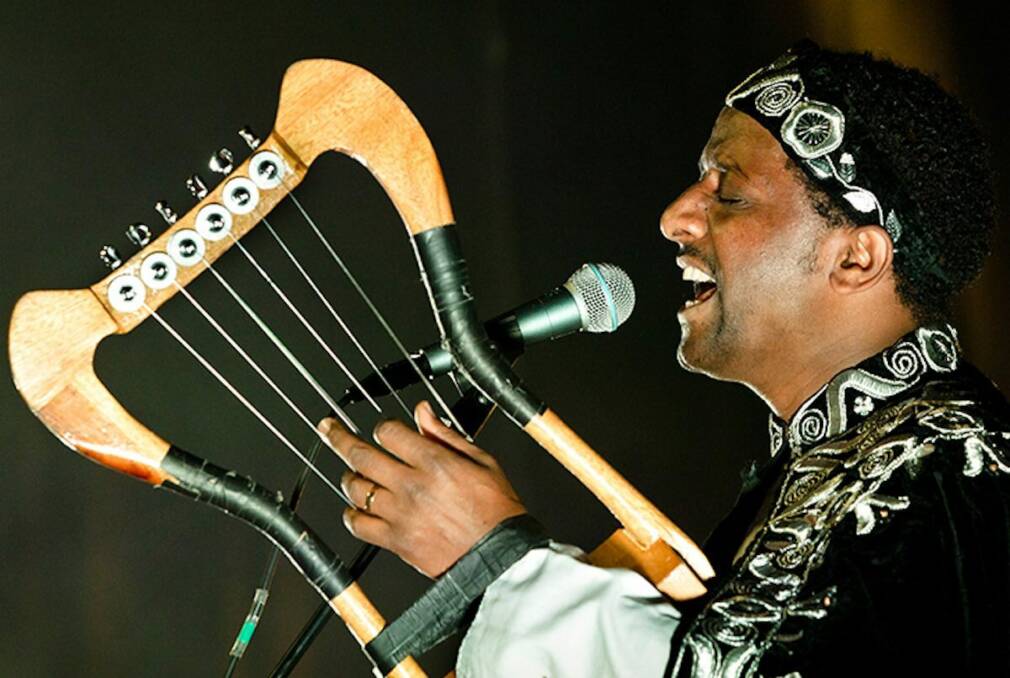 A brief survey of African harps: the kora, krar, adungu and more

Passed down from generations or remodelled from ancient tradition, African harps have been plucked and carried through antiquity into the music of today. Listen in on the krar, donso n'goni or adungu to hear the overtones of Africa’s stringed instrument.

Harps, lyres, bows, stringed instruments have existed in Africa since antiquity. Thanks to pyramid art we know the Pharaohs liked a lyre! whilst the kinnor – the ancient harp of the Israelites is mentioned an impressive forty two times in the Old Testament! Just as it is hypothesised that the West African djembe was the result of upcycling the ubiquitous mortar found in every Sehalian backyard, so it is believed that the earliest harps were quite literally hunting bows, augmented (or not) with additional gut strings and in some cases a soundboard.

So before we meet a few of these instruments let’s start with a quick guide to the harp family. Belonging to the string clan, a harp is classified as, “a plucked stringed instrument consisting of a resonator, an arched or angled neck that may be supported by a post, and parallel strings of graded length that are perpendicular to the soundboard.” In general a player does not stop or fret these strings which are left to ring open, although they may be dampened and harmonics or overtones can often be found at different positions along the length of the string. So introductions made, let’s rendez-vous with the first of our plucked cousins.

The krar is a fan shaped harp with five or six strings originating in Ethiopia and Eritrea. Tuned to a pentatonic (five note) scale, the krar is a portable lyre associated with the wandering tradition of bards and minstrels known as the Azmari.  Entertainers and social commentators comparable to West African griots, the Azmaris have carried the krar with them as they traverse the Ethiopian highlands since at least the fifteenth century, and continue to play the krar in social settings such as weddings, hotels, and the bars known as tejbeit which deal in honey mead.

The krar may be plucked or strummed (to produce increased volume and overtones) and the decorated wooden body fans out to a yoke or crossbar to which the strings are traditionally bound with either leather thongs or pegs, but more latterly with metal machine heads as found on an electric guitar. Meeting the challenge of harps producing soft or pianissimo volume, modern players often embed pickup systems within their instrument to amplify the krar and enable them to play in group settings as opposed to the lone performance of the Azmari.

Another harp with an itinerant back story is the donso n’goni found across Mali and Burkina Faso. A six string harp with a calabash resonator, the donso n’goni is the ceremonial instrument of the guild of hunters known as donso and an instrument that is traditionally played massed in large groups. A metal rattle is attached to the pole-like neck to provide a percussive buzz in sympathetic vibration with the strings, and the donso is usually accompanied with a karagnan, a cylindrical iron bell with ridges and scraped with a metal beater.

In West Africa hunters, like blacksmiths, are an artisanal fraternity and the guardian of the donso n’goni. However in the late 1950s or 1960s a smaller n’goni emerged in the Wassoulou region of Mali that could be played by anyone regardless of vocation.

Baptised the kamélé n’goni meaning `young man’s harp’ the instrument was adapted from the bassier donso n’goni by sourcing a small calabash, tuning the instrument a fourth higher and adding supplementary strings. Dispensing with the iron rattle mounted on the headstock, the kamélé n’goni quickly became the funkier younger brother of the donso n’goni and would be central to the rise of Wassoulou music in the 1970s and 1990s and a fixture in the bands of Coumba Sidibé and Oumou Sangaré among others.

The adungu is an arched harp originating in northwestern Uganda. Armed with seven to ten strings which run diagonally from a hollow wooden sound box covered with animal pelt to the curved neck, it is thought to be an ancestor of the Egyptian benet which dates to 3000 BC.

This design is believed to have been carried south along The Nile where arriving in Uganda it became the adungu, appearing in seven graduating sizes from bass to soprano.

In the 1960s this harp began to be taught in schools as part of the curriculum in attempts to nationalise the instrument and unite people of different ethnic groups and the result is that today the adungu is a staple in cultural and folkloric ensembles. Like the krar and the kamélé n’goni the adungu is often fitted with machine heads which make it easier to tune (and stay in tune!) in cooler climates, where it is increasingly amplified and played in bands such as that of Seby Ntege.

Our final harp is perhaps the best known West African export thanks to the likes of Toumani Diabate, Ballaké Sissoko, Sona Jobarteh, and others. The kora is a calabash harp found across the modern day countries of the pre-colonial Manding empire, notably Gambia, Senegal, Mali and Guinea Bissau.

Twenty one or twenty two strings are arranged in two ranks on a bridge which sits on the hide covered calabash, traditionally attached to the neck with leather rings known as konso. Along with the balafon and the djeli n’goni (a fretted lute rather than a harp) the kora is an instrument passed down through the griot lineage and is played to accompany praise singing.

Name checked in the Senegalese national anthem “Pincez Tous vos Koras, Frappez les Balafons” the kora is usually tuned to a seven note or lydian scale which varies regionally and can be played solo or in ensembles with other folkloric instruments.

Interestingly, the common ancestor for the kora, donso and kamelé n’goni is likely the Bolon from Guinea and Mali. Played seated, it is both a harp and a drum as the player alternately plays the three strings and pats the extra large (unshaven) hide covered calabash. A similar percussive technique is applied by kora players who flick the handles mounted on the calabash, whilst as we have observed with the other harps herein, modern kora players increasingly amplify their instruments and modify the sound through the use of pedals and effects. In common with the other harps we have met, luthiers and players increasingly use nylon fishing line instead of traditional wound gut to string their koras.

The violin, pulling on the heartstrings of Africa
Feature

With the priestesses of zãr
Reportage