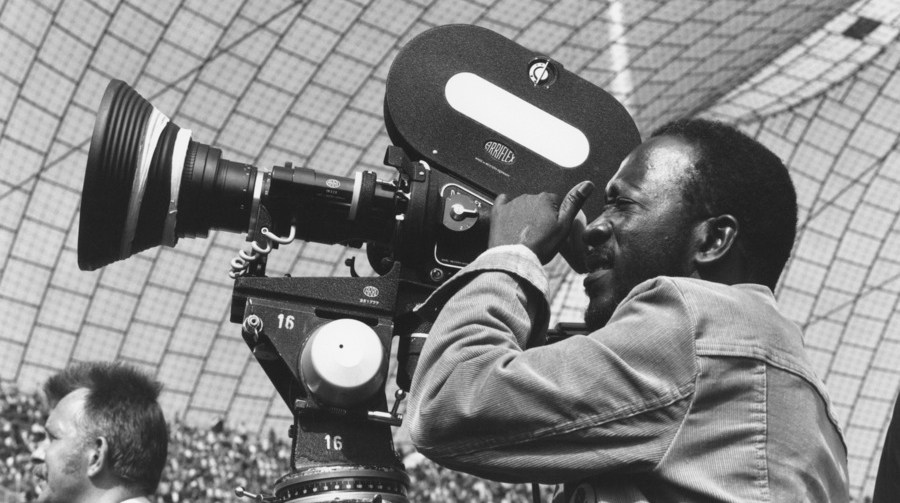 Ousmane Sembène, griot of the screen

PAM salutes the great Senegalese filmmaker Ousmane Sembène with a panning shot of his life and a pull focus on his use of music in cinema.

Ousmane Sembène or simply “Le Vieux” (the old man) left us eleven films and nine works of fiction. Instead of a kora or a balafon, Sembène chose the camera to fulfil a similar calling to that of West Africa’s guild of musical historians – the griot. Always uneasy with the title of father of African cinema, Le Vieux is nonetheless a reference point for all who have come since.

Born on New Year’s day of 1923 in Ziguinchor – capital of Senegal’s Casamance region, Sembène was the son of a fisherman and nephew of an Islamic scholar but his two grandmothers would prove a significant influence and inspire him to celebrate the courage and everyday heroism of African women in his films and literature. Legend has it Sembène was expelled from a colonial school at the age of thirteen when he retaliated in kind after a French teacher struck him, after which he was sent to his paternal family in Dakar where he took various jobs and began to attend the cinema.

Filmmaking at this time was still subject to The Laval Decree passed in 1934 which sought to suppress content seen as anti-colonial. Authored by Pierre Laval, the decree banned colonised people from filming themselves, instead of casting them as documentary subjects of a European gaze.

Fast forward a few frames and in 1944 Sembène is conscripted to serve in Niger and France during the 2nd World War thus beginning a period of time spent outside of Senegal during which he also worked as a docker in Marseille (documented in his semi-autobiographical first novel Le Docker Noir) before returning home at independence in 1960.

“If former films had contributed to colonial rule and to the misrepresentation of Africa and African people as seen through an alienating gaze” explains Fernandez “Then Sembène sees film as a medium to restore African dignity.”

Instead of the “Tarzanistic images of Africa” of the colonial period, the returned Sembène now sets out to tell authentic African stories recognising the potential of film to reach the widest possible audience. Noting the high levels of illiteracy maintained in the colonial period Sembène’s manifesto becomes cinema as “night school” and in 1963 he writes and directs Borom Sarret, considered the first ever film made in Africa by a Black African.

Running at just eighteen minutes, this powerful day in the life short explores themes of work and the post colonial city with an economy of dialogue and a good dose of folkloric music.

The fable of a humble Dakar cart driver Borom Sarret (The Wagoner) begins with the titular hero leaving home promising his wife he will return with money to feed the family. To the sound of the plucked Xalam lute (West African ancestor of the banjo and the most griot of all instruments) we follow the cart driver as he picks up various passengers, all of whom have their own problems to which the city and the cart driver appear stoically indifferent.

On a break the cart driver becomes entranced by a griot who sings his family’s praises, distracting him from the hardship of his life and prompting him to hand over all of his morning’s earnings in patronage. To make matters worse his cart is then impounded when he reluctantly takes a fare to an exclusive neighborhood formerly inhabited by the French and now by the new African bourgeoisie and returns home penniless from his days toil.

Sembène followed up with La Noire De in 1966, shifting his gaze to the experience of a Senegalese maid who leaves Dakar to join her employers when they return to France. Documenting the continuity of lead character Diouana’s domestic exploitation from Dakar to Antibes, Sembène juxtaposes jaunty piano music suggesting the carefree Cote d’Azur with haunting kora music, and uses Diouana’s interior monologue to great effect as Dr Estrella Sendra Fernandez explains: “Sembène offers representation through African lenses. Instead of the mute subjects of colonial films he “provides internal focalisation through voice-over.”

Perhaps Le Vieux’s most musical film is Ceddo released in 1977 for which he recruited the great Cameroonian saxophonist and vibraphonist Manu Dibango. Set in a village which serves as a microcosm of the continent, it is Sembène’s most pan-African film and is an abridgement of several centuries of African history in which a community tries to preserve their traditional culture against the aggressive imposition of Islam, Christianity and the slave trade.

In an opening scene completely without dialogue we observe the tempo of a village no longer at ease, as a sense of drama and disquiet is set up by a charismatic motif that Dibango riffs on throughout the film. In its depiction of pre-colonial Africa Ceddo is another Sembène story to feature a griot who wanders through the film with a Xalam.

For what would be his final film Moolaadé released in 2004 Le Vieux recruited a pan-African crew from Burkina Faso, Senegal, Ivory Coast, Benin and Mali.

Examining and arguing against the practice of Female Genital Mutilation it is another film in which Sembène celebrates the strength of African women and alongside the incredible ensemble (many of whom had never acted before) Moolaadé appropriately features the music of Mali’s outspoken champion of Women’s rights – Oumou Sangaré.

In one particularly powerful frame we see a pyre of radios confiscated from the women of the village set alight next to the mosque. As a plume of black smoke rises from the bonfire the radios nonetheless continue to play Oumou’s “Ah Ndiya” symbolic of the failure of the conservative elders in the village to silence the women.

Incidental music again helps to tell the story, notably the plaintive sound of the Fula flute used as a motif throughout the film which upon Sembène’s request was dubbed into six African languages and toured rurally in West Africa (where the post film discussions that followed each evening were longer than the film itself).

Ousmane Sembène went to join the ancestors on the 9th June 2007 but his films, novels and stories live on. From that first feature realised with a second hand 16mm camera and surplus filmstock sent by comrades in Europe, this great pan-Africanist planted the seed for the African film industry itself. Without Le Vieux we may never have had FESPACO or even Nollywood.