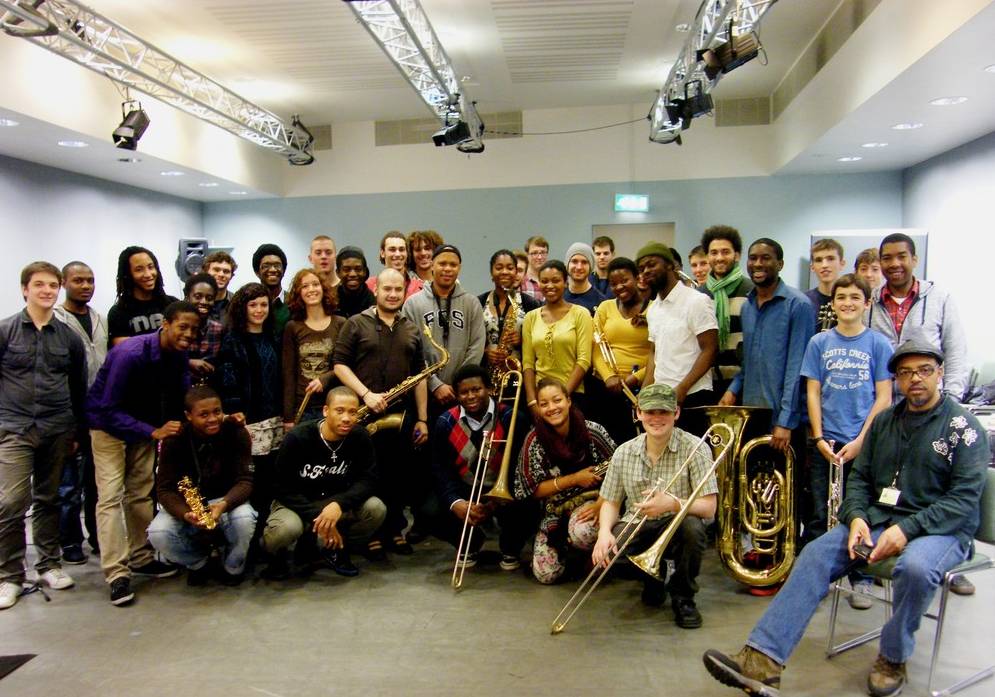 London has its own jazz and it’s here to stay

Vanguards of the London jazz scene have garnered acclaim by cultivating a culture of musical diversity and inclusion passed on through dedicated teachers and a spirit of giving.

London’s current crop of bright young jazz musicians might wear trainers rather than suits on the bandstand, but make no mistake, they know their jazz history and are here to make some more. From Shabaka Hutchings to KOKOROKO, Nubya Garcia to Zara McFarlane, for this extended family of diverse musicians London itself has been their conservatoire and they have cut their chops through an ecosystem of jam sessions, gig nights and music education programmes that have particularly encouraged and supported young women, and people of colour.

In their twenties and early thirties this new vanguard are no overnight success and thanks to strategic intervention and mentoring have positively disrupted the UK music scene, bringing jazz (and a lot more) to international stages such as Glastobury, The BBC Proms and SXSW and recently clearing up at October’s Jazz FM awards.

So where did all this music come from?

For a long time British Jazz was somewhat in awe of the U.S and the canonised American players and their jazz standards. British jazz musicians and audiences frankly did not reflect multicultural Britain. Something started to change though in the early nineties around the time a bassist by the name of Gary Crosby (now Gary Crosby OBE) created a Sunday jam session at Camden’s iconic Jazz Cafe in 1991. This open session would evolve into the hothouse of Tomorrow’s Warriors, namechecked by nearly everyone making ripples in UK jazz.

One musician who braved the stage at those early jam sessions was pianist Peter Edwards who would become Tomorrow’s Warrior’s 1st protege and later lead The Nu Civilisation Orchestra – one of the mainy splinter groups of the organisation. I caught up with Peter to ask about those 1st rumbles of the current scene.

“I’d seen Gary perform at The Ealing Jazz Festival in the mid nineties and it was the 1st time I realised there were Black British musicians playing the music I love. About three years later musicians I knew were all going to these Sunday jam sessions at The Jazz Cafe and again I bumped into Gary and I realised, oh! you’re behind this. At this time Tomorrow’s warriors was really more of a band that hosted a jazz jam. Gary would be down there to oversee it and give them encouragement. Going to the jam session was an education in itself. You’d see them and you’d want to do that yourself. I’d go home and look for the records of what was played.’’

Out of this jam session Tomorrow’s Warriors would grow into a free weekly programme at London’s Southbank Centre, eschewing a formal curriculum for a more holistic approach of  mentoring and enabling, encouraging ownership and leadership music, putting into practice the mantra of “each one, teach one.” Co-founder and CEO of Tomorrow’s Warriors Janine Irons (MBE) simplified it for me thus; “It’s a virtuous circle. Our grads come back and teach the next generation. It’s a lineage, and they’re getting better, younger!“

Anyone who has heard records such “Fyah” by Theon Cross who has been reinventing the tuba, or the diasporic and celebratory music on “Driftglass” by Cassie Kinoshi’s Seed Ensemble would recognise there is a lot more stirred into the London mix than just jazz.

From soundsystem culture, to soca, highlife to afrobeat, with a dash of grime, Tomorrow’s Warriors have helped meld musicians who are nothing but authentic as Janine explained; “It’s freedom to explore MUSIC. Not just jazz. They all bring their upbringing and their cultures as they come through the door. We’re all about diversity, and sharing as unique individuals, what we have, to enrich the lives of others.“

“Permission” is another word one hears a lot when speaking to people within the scene.

Jennie Cashman Wilson is founder and CEO of Abram Wilson Foundation, a music education program set up to honour the legacy of the late New Orleans’ trumpeter Abram Wilson who also mentored many on the scene. Jennie also endorsed the importance of role models when I spoke to her, telling me `That word permission is so important. It’s so great to see Black women leading bands. If they don’t see it, they can’t see themselves in that world. There is a strong sense of “I need to pass this on to someone else and make sure it doesn’t stop with me. A real sense of duty.”

Young musicians coming up through Tomorrow’s Warriors or the excellent Kinetika Bloco (another significant youth music programme in the capital) now want to be the next Sheila Maurice Grey (KOKOROKO) or Moses Boyd (Mercury nominated drummer for nearly everyone and an artist to watch in his own right) rather than the next Miles Davis.

Also notable about this London movement in UK jazz is that the music is intended for dancing rather than listening, so forget those tired jazz cliches! A number of grassroots nights such as Jazz Re:freshed which ran at Ladbroke Grove’s Mau Mau bar, or the elbow to elbow euphoria of Steam Down at Buster Mantis in Deptford, were key to providing an outlet for musicians to take risks and engage up close with a moving audience, not a sedentary one.

Thinking about how live this music is I was keen to understand how the players and the music education programmes have been adapting to the challenges of the pandemic in 2020.

“2020 has been about adaptability and making the most of the resources and networks you have to hand” commented Peter Edwards who has been working on an innovative hybrid of listening party and dance performance of Charles Mingus’ classic album The Black Saint and The Sinner Lady.

Also going digital are Tomorrow’s Warriors who took their summer school online as Janine Irons enthused “We’ve managed to maintain the programme online, uninterrupted. For our summer school we did 40 sessions which is more than double of what they did last year!“

For Jennie Cashman Wilson of Abram Wilson Foundation it’s been about equipping fledgling musicians with the skills to survive in a much changed musical landscape; “It’s so necessary especially at the moment to support them to covid-proof their careers. Musicians are finding it really tough and can be stuck in the mindset of the traditional roll out and release followed by gigs.“

Whatever the near future of live music in London looks like, it is in safe hands with a prolific generation of musicians who are simultaneously paying it forward to the next generation.