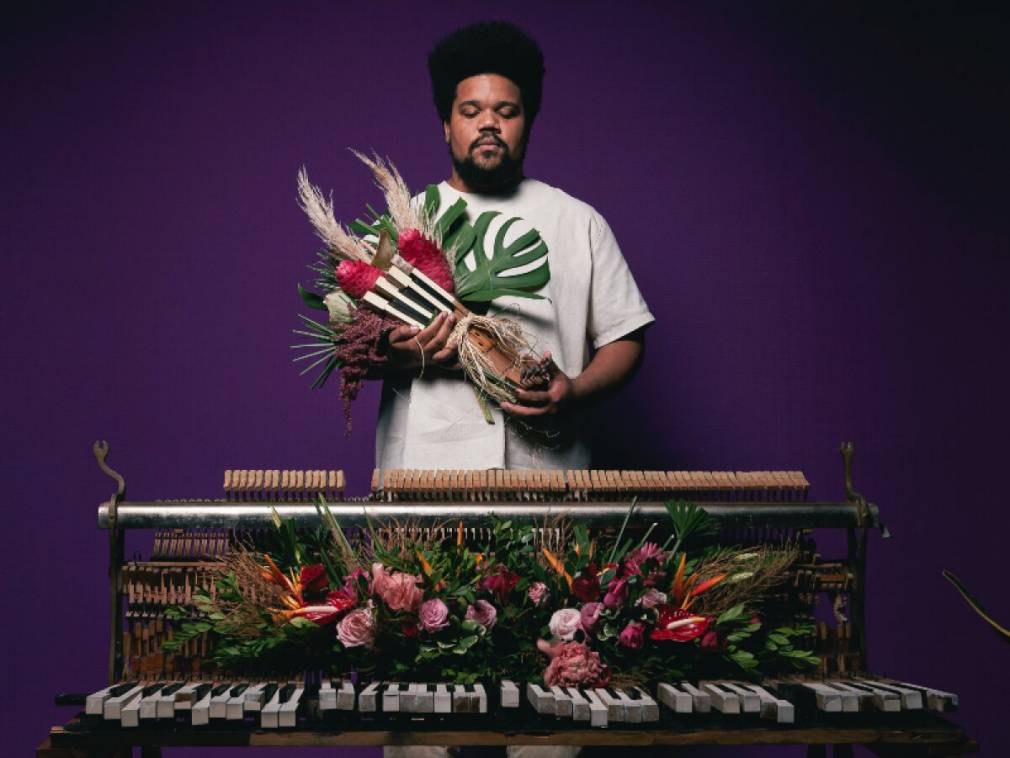 With Sankofa, the pianist mixes jazz and Afro rhythms, paying tribute to many black figures in Brazilian history. Both a memorial and a spiritual album.

Like 20% of the population of Recife, in the north-east of Brazil, Amaro Freitas comes from the slums. This ambassador of Brazilian jazz remains very attached to his native region, where the first synagogue in the Americas is located. Many cultures have mixed here – Indigenous people, Europeans and of course Africans. Even today, the ritual of maracatu is celebrated in homage to the Kongo king. Amaro’s jazz, faithful to the traditions of his native Pernambuco, bears witness to this diversity.

Following the success of Rasif in 2018, Amaro has performed both in Europe and the United States, leaving his own mark on mythical jazz clubs of the West. The tour, however, confirmed for him the prevalence of stereotypes: “I remember the applause at night, in a city in Europe, and the discriminatory looks during the day.” In Brazil, he recalls: “I arrived to play at a place and a person asked me if I was the guy carrying the piano.”

It is with these experiences in mind that Amaro Freitas sets out to dismantle racism on this new album, drawing on the forgotten stories of inspirational figures from black Brazil: “I worked to try to understand my ancestors, my place, my history as a black man. Brazil has not told us the truth about Brazil. Black history before slavery is rich with ancient philosophies. By understanding the history and strength of our people, we can begin to understand where our desires, dreams and wishes come from.”

The name of the album refers to an Adinkra symbol of a bird, named Sankofa, whose head is turned backwards. It was used by the Akans of Ghana and Ivory Coast, Amaro explains: “The symbol of the mystical bird, which flies with its head backwards, teaches us the possibility of returning to our roots, in order to realize our potential to move forward. With this album, I want to bring a memory of who we are and pay homage to the neighborhoods, names, characters, places, words and symbols that came from our ancestors. I want to celebrate where we come from.” Whether a sign of fate or simple coincidence, Amaro discovered this symbol during an African fair in Harlem, a New York neighborhood in which great jazz pianists have lived, such as Thelonious Monk and Art Tatum, both of whom were huge sources of inspiration for the Brazilian artist.

Along with bassist Jean Elton and drummer Hugo Medeiros, with whom he formed the Amaro Freitas Trio, the pianist solicits the rhythms of his ancestors, who reappear in his jazz. In “Baquaqua,” he tells us the story of Mahommah Gardo Baquaqua, a slave from West Africa who, after learning to read and write, managed to escape from New York in 1847. “Vila Bela” is dedicated to Tereza de Benguela, who ruled a quilombo (brown village) in the 18th century, where black and Indigenous communities resisting slavery took refuge near the current Bolivian border.

The pianist also advocates for the preservation of the environment with “Cazumbá,” symbolizing the interdependence of all living things. This piece transports us to a river in the rainforest, embellished by the songs of birds. Amaro also rejoices in all these struggles with “Ayeye,” meaning “celebration” in Yoruba. He also pays homage to what he considers a living legend in  “Nascimento,” a reference to legendary Brazilian guitarist Milton Nascimento, with whom Amaro collaborated on the Existe Amor EP: “It was an unforgettable experience. Milton is love, lightness, art and memory.”

This is Amaro Freitas’ most personal and accomplished project to date, mixing different Afro-Brazilian rhythms, from samba to maracatu, passing through frevo, without forgetting jazz, funk as well as the musical heritage of his evangelical education. Like a sankofa, Amaro dedicates this album to the power of transmission: “I would like to pass on this message to future generations: let’s give ourselves more time, let’s dedicate ourselves to deeper things. Let’s stop swimming on the surface, let’s dive in.”

Sankofa will be released on June 25, via Far Out Recordings.

Check out Amaro Freitas in our Songs of the Week playlist on Spotify and Deezer.